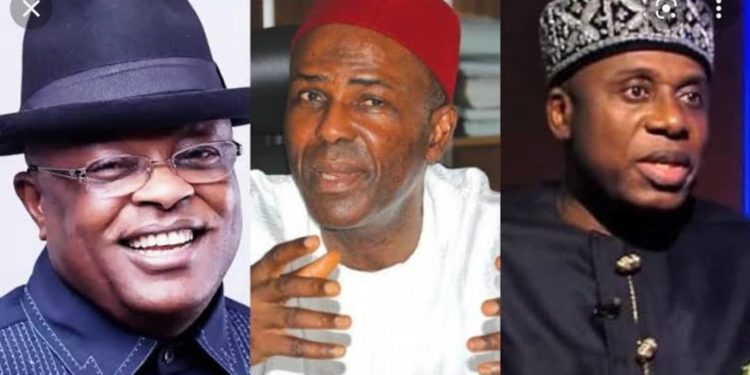 The apex Igbo socio-political organisation, Ohanaeze Ndigbo Worldwide, has appealed to the ruling All Progressives Congress (APC) and President Muhammadu Buhari to choose peace, unity, and harmony above all other considerations in the choice of his successor.

The Ohaneze Ndigbo noted that the choice of an Igbo from South-East or Ikwerre in Rivers State remains the best vaccine to heal and unify Nigeria.

In a statement signed by the Secretary General of the group, Mazi Okechukwu Isiguzoro, a copy of which was made available to LEADERSHIP, said that the imposition of another northern candidate in 2023 will not be in the best interest of the Igbos.

He noted that President Buhari’s hopeful consideration of a Southern aspirant of Igbo extraction as APC presidential candidate will reset Nigeria’s potentials and portray the president as the hero of Nigeria’s democracy.

Mazi Isiguzoro insisted that all

statesmen and patriots must seek to forge cohesion and brotherliness above actions that will put Nigeria on dangerous routes, adding that as a nation suffering acute hypertension and insecurity, there was the need to prioritise tension-dousing options such as Igbo presidency in 2023.

“The retention of power in the North in 2023 will be a recipe for political maladies, including migraines and perhaps epilepsy. It’s patently disingenuous, even foolhardy, to abandon the principle of rotation of power in a Nigeria that has not outgrown the Quota System and Federal Character.

“Our nation needs peaceful and credible elections to yield a genuine leadership anchored on bonafide representation, transparency, and accountability.

“The unity of Nigeria can no longer be taken for granted. It must be nurtured with fairness, equity, and social grievances,” he said.

Ohaneze Ndigbo noted that President Buhari has an opportunity to engender national unity by doing the right thing.

“We implored the President to rise above the immature and primitive calculations of the PDP and support Igbo either from the southeast or Ikwerre in Rivers state to heal the wounds of the injustice of marginalization and unify the country,” he noted.

He stated that the Igbo nation will forever remain indebted to the President should he endorse a Southerner of Igbo extraction, adding that such will douse the rising secessionist campaign of Biafra.

“Nothing is more important than unifying the country with an Igbo as Buhari’s successor.

“Ohaneze Ndigbo and the entire Igbo nation, having made the quest for the Igbo presidency a political priority and mindful of existing political realities, urge President Buhari to support the candidacy of any Igbo from the seven Igbo speaking States, including Ikwere in Rivers state,” he stated.

Mazi Isiguzoro pointed out that some Igbo aspirants have some resemblances of Zik of Africa with national acceptance to defeat the PDP presidential candidate in 2023.

“Popular amongst them, is the Igbo from South-South that led Buhari’s campaigns for two consecutive victories in 2015 and 2019, the other was the National Chairman of the defunct ANPP and assisted in APC’s formation.

“Another is the performing and only Southeast Governor in the race and the last but not the least is a serving Senator and a former Governor whose faction of APGA boosted the formation of the APC,” he stated.