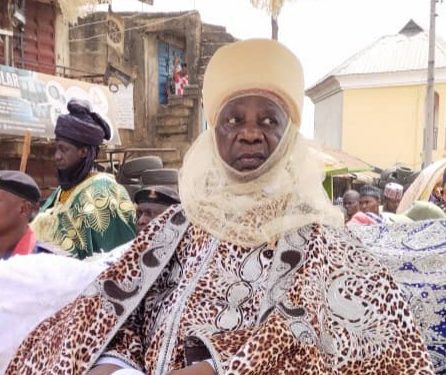 The Emir of Ilorin, Alh Ibrahim Sulu-Gambari, has banned the shooting of any form of unauthorised pre-wedding video and photographic expedition at the Ilorin Central Jumma’at Mosque.

The Emir’s decision was a reaction to an amorous pre-wedding videos recorded at the Mosque, which has since gone viral

Sulu-Gambari dismissed the allegation of granting approval to people’s access into the main hall of the Mosque, warning those dropping his name to stop such action forthwith.

In a statement signed by the chairman, Central Working Committee of the Mosque and Danmadami of Ilorin, Alhaji Shehu AbdulGafar, he quoted the monarch as saying that he viewed the video in question with utmost disappointment.

He appreciated the concerns and comments generated by the video since it went viral, adding that everything worth doing would be done to ensure that a repeat of the incident does not occur.

He added that the Mosque, particularly the ultramodern edifice, does not exist for such a practice from anyone or group no matter how highly placed as he said that it was important for all Ilorin patriots and their friends to judiciously use the Mosque for the purpose of worship and community development.

The Emir, therefore, charged the Central Working Committee of the Mosque and staff of the edifice to ensure that no one is allowed to shoot any video or take amorous photograph at the Mosque.

The monarch warned that the violation of his directive would be visited with appropriate sanctions so as to discourage such illicit practice, which exposes the Mosque and Ilorin Emirate at large to ridicule.

Train Attack: Family Of 6, 1 Other Regain Freedom After Gumi's Intervention