Angela Nkwo-Akpolu, writes on the powerplay in the Imo State House of Assembly. 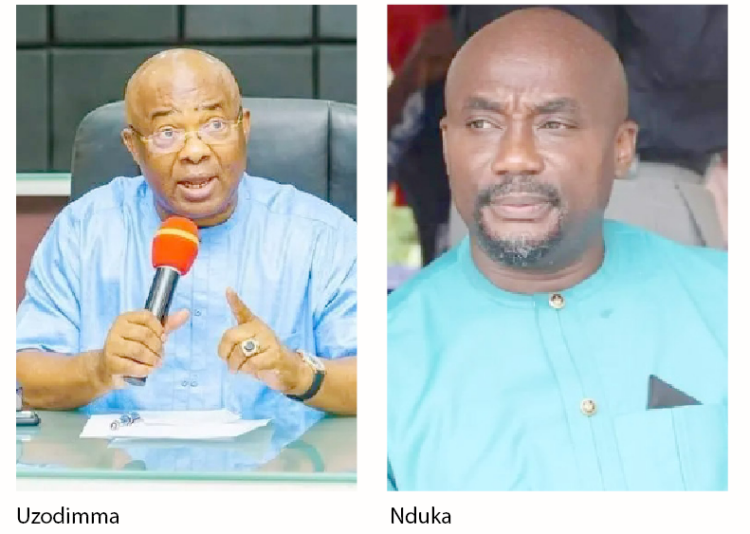 The political intrigues in Imo State are only surpassed by few states and the reasons are not far fetched.

So far, the state appears to have the highest turn over of speakers of its State Assembly, having produced four persons in the last three years.

Imo State has three senatorial zones: East, West, and North which has the least number of local government areas.

From Dr Chiji Collins, Chief Paul Emeziem, Chief Kennedy Ibeh, and now Chief Emeka Nduka, all have been speaker for the Imo House of Assembly and still counting.

Already, four lawmakers have already held the position as speaker of the 9th, even as there are possibilities that each lawmaker from the zone will preside over the house before it winds up.

Since 2011, the Imo Assembly appears to have run into troubled waters and is yet to shake it off.

Under Chief Ben Uwajimogu as speaker, the Assembly is reputed to have approved a-four year budget for then Governor Rochas Okorocha as governor.

In 2015 when Rt Hon Acho Ihim took over as speaker, he single handedly brought disparagement upon lawmakers due to his undiluted loyalty to then Okorocha. He was allegedly sighted more in Government House running errands for Okorocha like a domestic aide. He never failed to describe then First Lady, Dr Nkechi Okorocha as his mother in order, according to some pundits, to remain as the number one lawmaker.

Upon assumption of office by Chief Emeka Ihedioha as governor, Imo people expressed hopes of a vibrant state Assembly especially because the former lawmaker rose to become deputy speaker of the House of Representatives.

Under Ihedioha, Dr Chiji Collins (Isiala Mbano state constituency) was the speaker and to observers, it was a cordial relationship or so we thought. But immediately after the Supreme Court pronouncement, Chiji began singing like the Keneri bird of supposed anomalies. All in a bid to remain as speaker.

Remain he did, until November 13, 2020 and that signalled the era of changing speakers. Chiji served 17 months before he was impeached though he later appealed that it be converted to resignation which his colleagues obliged.

While he believed his colleagues who signed an impeachment notice against the deputy speaker, Chief Amara Nwanyanwu which he announced, he didn’t realise they could renege their stand.

Less than 24 hours later, the lawmakers reconvened and locked him out of the Assembly premises.

Next was Rt Hon Kennedy Ibeh (Obowo state constituency) who replaced Emeziem and reaanounced Nwanyanwu as the deputy speaker. Cerebral and intelligent, he was expected to restore the respect of the House but he sunk it deeper.

It was Ibeh who declared Ngor Okpala seat then occupied by Hon Tochi Okereke seat vacant for absenteeism. And Nkwerre seat held by Rt Hon Obinna Okwara vacant for decamping to the Peoples Democratic Party (PDP) to secure a ticket for the House of Representatives.

A social commentator Daniel Okeoma said “Ibeh really played god while as Speaker”. He was speaker from November 8, 2021 to September 19, 2022,  exactly 10 months and eleven days.

Sources said he was impeached for withholding some monies released by Governor Uzodimma for the state visit by President Muhammadu Buhari to commission the refurbished Assembly premises but Ibeh insists he resigned to concentrate on his third term bid to return to the Assembly.

On September 19, 2022, the lawmakers announced Rt Hon Emeka Nduka (Ehime Mbano state constituency) as the new speaker even as pundits have said he may be replaced again.

Nduka was elected during a closed door special sitting presided over by the deputy speaker, Mr Amarachi Iwuanyanwu (APC Nwangele) who called for nominations after reading the letter of resignation.

Reacting, Chuma Ohaegbulem wrote on Facebook “Okigwe zone be like South East from May 1999 to 2003 as Senate President. So confused and uncoordinated. Finally what we have in the state assembly are errand boys to the governor under APC both with Rochas and Uzodimma”.

Michael Marvellous Junior wrote “Before the end of this 9th Assembly, Every house member from okigwe zone must test the seat of speakership. It will reach everybody”.

Other commentators on radio said the new speaker may not exceed six months as the other lawmakers from Okigwe zone are desirous of adding the title to their resume.

Unfortunately people are beginning to lose faith in the lawmakers due to the  failure to provide what analysts described as effective oversight functions on the executive arm of government.

Although this situation is not peculiar to Imo Assembly, pundits however aver that the situation in the state clearly reflects the crisis of lack of legislative independence.

Imo lawmakers unfortunately are trying to outdo themselves in who has “absolute loyalty” to the ruling All Progressives Congress.

Already they have passed some laudable bills like removal of retirement benefits for former state governors and the Violence Against Persons Prohibition law which protects citizens from all forms of abuse.

However, the lawmakers have been criticised over their alleged silence on the security situation in communities.

Despite the repeated uprisings, deaths, and destruction of peoples properties, the lawmakers are yet to make any bold pronouncement. However, Imo State Governor, Hope Uzodimma, while receiving the new speaker, commended the lawmakers for their peaceful conduct during the process that led to the election of the new speaker, saying that “it shows that African democracy is developing.“

He added, “We wish you well and we will continue to support the assembly with facilities that will help you function effectively as we have always done.

“I urge you to operate in a manner that will allow peaceful conduct of legislative duties and ensure that Imo people are better off,” he said.

Earlier in his remarks, the new speaker  (APC-Ehime Mbano), commended his colleagues for nominating and electing him as their chief servant.

Nduka promised to be transparent in his dealings and also ensure that he carried out people-oriented programmes for the benefit of all.

“By the special grace of God, I am going to live up to their expectations and up to the expectations of the people of Imo to make this government proud,” Nduka added.

With Rt Hon Emeka Nduka emerging as speaker, Ehime Mbano local government holds the positions of senator and secretary to the state government and has been described as an emerging power hub in the state.

While Nduka is settling in and planning to name new committee heads, analysts have called on him to tread carefully and not put the 9th Assembly in further ridicule. Will he choose to restore the respect or diminish the respect of the Imo Assembly, the answer lies in the days and months ahead.