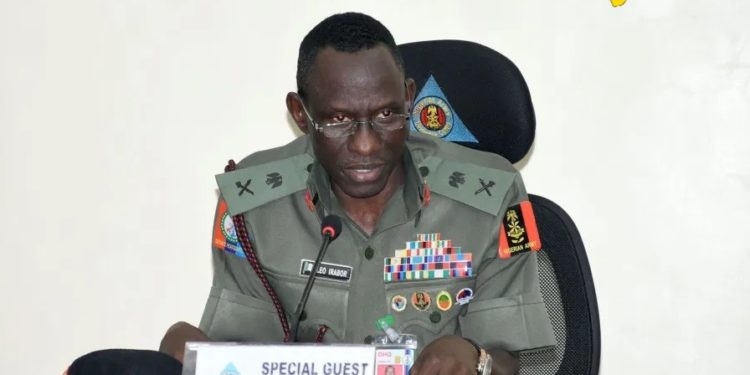 Chief of Defence Staff (CDS), Gen. Lucky Irabor, has kicked against the call by Governor Bello Matawalle of Zamfara State to the people of the state to bear arms to defend themselves against bandits.

The CDS faulted the directive yesterday when he addressed journalists at the opening of the Joint Exercise for the National Defence College and War Colleges of the Armed Forces of Nigeria, code named “Exercise Grand Nationale,” in Abuja.

Irabor’s position is supported by Kadunabased Islamic cleric, Sheikh Ahmad Gumi, who expressed reservation over the call for Nigerians to resort to self-defence.
Gumi said the approach might lead to anarchy and more extra judicial Killings.

Gumi, who stated this on his verified facebook page yesterday, asked: “If Zamfara will start arming farmers and villagers, being the wild west of Nigeria today, who can control the spiral of anarchy and extrajudicial killings that will turn Nigeria into a river of bloodbath later?”

Irabor argued that the call was not right, as the armed forces and other security agencies were there to handle the challenges.

He, however, said it was the responsibility of the attorney-general of the federation to look at the constitution and the laws to see whether the governor had such powers.Irabor said he was yet to understand the basis for asking the citizens of Zamfara to bear arms.

“I believe that, in my view, it is not the right way to go. Of course, there are actions that members of the security agencies and the armed forces, in particular, the police and other security agencies, are doing to address insecurity in Zamfara and environs.

“Beyond that, of course, there are other legal issues, other issues of governance, issues that the government could have addressed using the instrumentality of the law that are available for him to bring greater peace and security.

“But like I said, I do not intend to say much about it, but I believe that the Federal Government, using the Attorney General, will look at the details of that press release and give further instruction.

Irabor said the armed forces were only an instrument of policy implementation, adding that it did not take instructions from state governments.

He said the constitution gave rights and powers only to the Commander-in-Chief for the use of the armed forces.

On the joint exercise for National Defence College and War Colleges in the country on national security strategy, Irabor said scholars had described the current security environment as volatile, uncertain, complex and ambiguous, hence the need for both strategic and operational level engagement.

The commandant, NDC, Rear Admiral Murtala Bashir, said the exercise was a significant milestone in the life of the colleges and the Nigerian armed forces at large.
Bashir said the security challenges facing the country were constantly evolving, as such addressing it required seamless joint operation to keep pace with the evolution of those threats.

In his reaction, Gumi urged Nigerians to elect a president that can chart a course for a new nation through restructuring and devolution of central power allowing the federating entities to set their own priorities which includes state or regional policing and revenue control, said 2023 elections should be issues based campaigns.
Gumi however maintained that, Nigeria now needs a national leader to the core with a wide chest of accommodation, not one that has a sectional or sectarian base aspiration to protect.

Gumi’s statement read in part, “We have now four viable contenders each representing (by divine providence, not ‘genuine mistake’) which falls naturally to the aspirations of the Nigerian mosaic population. Some of the candidates have core supporters from the core regional blocks that form the essence of Nigerian amalgamation.
Despite their outward attempts to appease all Nigerians, these candidates cannot runway from the aspiration of their bases. We shouldn’t expect Tinubu for example to openly censure Sunday Igboho or Peter Obi to publicly condemn Kanu as we saw Atiku condemn Boko Haram and the political sharia that we were all at a time enthralled by that cost him a big political backlash in the region then.”

“Tinubu and Kwankwaso have signature headgears. When I saw Tinubu’s placeholder VP on BBC news with the ‘infinity’ cap, it tells a lot about the contender himself. Imagine a federal cabinet all with redcaps or infinity caps. What fresh ideas can get through leadership that is domineering and imposing?

“With the sycophancy known with Nigerian politicians, we will remain imprisoned and stagnant in the vision of one man. Nigeria is more complex than a man’s personal choices and idiosyncrasies”

But if Amotukun for instance has unconstitutionally given itself the power to arrest Fulani herdsmen and curb their free movement in the southwest without corresponding outfits that can check Yoruba who are widespread in the north, that is a time bomb for ethnic clashes as we saw previously between Yoruba and Hausas in Lagos in the late 90s.

If Zamfara will start arming farmers and villagers, being the wild west of Nigeria today, who can control the spiral of anarchy and extrajudicial killings that will turn Nigeria into a river of bloodbath later?”

Meanwhile, Governor of Ondo State Oluwarotimi Akeredolu has said the call by Matawalle to the residents of the state to obtain guns to defend themselves against terrorists was in order.

Akeredolu who commended the boldness of Matawalle on taking such a decision said the Zamfara State government was trying to confront the security challenges in his state by adopting a pragmatic approach.

Akeredolu, in a statement issued by his senior special assistant on special duties and Strategy, Dr Doyin Odebowale, said with great concern, the continued “refusal by the Federal Government to grant licenses to security outfits, run by some states, to bear sophisticated firearms capable of restraining, effectively, acts of criminality and brazen impunity with commensurate responses”.

The governor who said the establishment of a state Police is the solution for the insecurity in the country said the press statement released by the Ministry of Information of the Zamfara State government on, “the need for citizens to arm themselves for self-defence, among others, confirmed the pervasive loss of confidence in the current security arrangement the Country.”

According to Akeredolu, the development signaled a situation of near- capitulation on the part of the security agencies centrally controlled by the Federal Government.

He maintained that the development portends great danger for the polity.

His words: “It is a sad commentary on the increasing inability and impotence of the Zamfara State government, and other states, to protect their citizens in the wake of relentless and mindless assaults by terrorists and bandits.

“It suggests a total lack of trust between that state government and Federal Government on one hand and the helpless and hopeless situation in which the people have found themselves concerning the security of lives, on the other.

“The stark reality confronting the people of Zamfara leaves the government with no esoteric option but to lean heavily on the current arrangement.

“The government and the people of Zamfara State have been pushed to the wall. The feeling of despondency is pervasive in the land. We must, however, advise caution. The directive of the state governor to the commissioner of Police to issue licenses to qualified citizens to bear arms in the defense of their immediate environments and the state, in general, is commendable. But the NSA and Inspector General of Police may have to issue licenses to possess a certain category of arms.

“No such licenses have been issued to individuals since 2007 while those which existed had been revoked. Therefore, this directive, attractive and compelling in the current circumstances, may be stifled by existing federal arrangements,” he said.