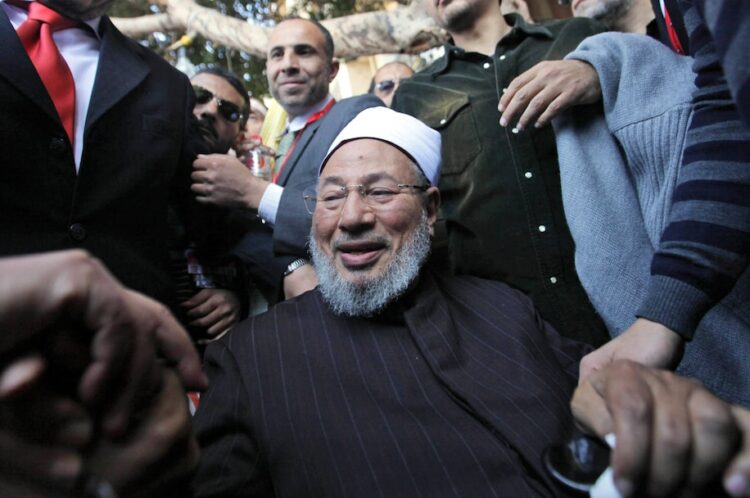 Yusuf al-Qaradaw, an influential Islamic cleric whose views reached across the Arab world on Qatar’s Al Jazeera network, backing the Arab Spring uprisings and denouncing al-Qaeda while facing condemnation from some leaders who saw him as a threat, died Sept. 26 in Qatar’s capital, Doha. He was 96.

Thousands of mourners attended Mr. Qaradawi’s funeral in Doha on Sept. 27, a day after his death was announced by his family and state-run media in Qatar, where Mr. Qaradawi had lived in exile for decades after leaving his native Egypt. No cause was given, but the cleric had been largely out of the public eye since falling ill with the coronavirus last year.

Mr. Qaradawi’s ideology was largely a self-made amalgam of Islamic schools — some moderate-leaning and others backing violence as a necessary tool — giving him a reputation as an independent voice that could sway in various, and at times apparently contradictory, directions.

At the core of his beliefs was an adherence to the Muslim Brotherhood, a group forged during his boyhood in Egypt that held Islam as a foundation for government, education and other key aspects of civil life. That itself made him a hugely polarizing figure.

The Brotherhood is seen as the enemy of many Western-allied regimes across the Muslim world, which made Mr. Qaradawi a pariah for leaders in places such as Saudi Arabia and the United Arab Emirates.

In 2015, an Egyptian court sentenced Mr. Qaradawi in absentia to death. Two years later, Qatar faced a full-scale blockade by Egypt and several Persian Gulf neighbors, partly for providing haven for Mr. Qaradawi and others.

The pressure and persecution only elevated his stature among many followers. He wrote more than 100 books, including some highly regarded volumes on Islamic jurisprudence, and helped lead a website, Islamonline.net, that offered what some called e-fatwas on politics and personal conundrums.

But his platform on Al Jazeera gave him the self-crafted title of “global mufti,” bringing him into hundreds of millions of homes. He delivered sermons, gave interviews and hosted a call-in show, “Shariah and Life,” that dispensed guidance on topics ranging from euthanasia by Muslims (not acceptable), women’s role in politics (fine as long as traditional Islamic codes are followed) and whether it’s permitted to sterilize cats (yes, if done humanely).

His multimedia reach gave his bigger pronouncements resonance unmatched by nearly any other Islamic scholar. He denounced al-Qaeda and the 9/11 attacks, but also declared that suicide bombings by Palestinians against Israelis were “heroic martyrdom” and that retaliation against U.S.-led forces in Iraq was legitimate defense. In 2009, he described the Holocaust as part of “divine punishment” against Jews.

In 2016, Mr. Qaradawi revised his fatwa on Palestinian suicide attacks, saying they were no longer permissible because Palestinians had other options to resist Israel.

“He is regarded by many as a ‘moderate’ — a possible bridge between the West and Islam,” Tommaso Virgili, now a researcher on Islamic issues at the Berlin Social Science Center, wrote in 2018. “However, many of his tenets show very little ‘moderation.’”

Mr. Qaradawi dismissed contentions that his views fed tensions in the region. He described Muslims as part of a “single nation” that is not at odds with the West, but is also compelled to fight back against perceived injustices.

“I was the first who condemned the crimes of Sept. 11, even before it was clear to many that al-Qaeda was behind the attacks,” he told Der Spiegel in 2005. “There is certainly a difference if violence is used in a blind terrorist act or if it is used in rebellion against a foreign occupying force.”

The interviewer asked if Mr. Qaradawi felt the Muslim world is morally superior.

“We condemn the excessive materialism of the West. We deplore the loss of solidarity and brotherliness, the decay of morals and the daily violations of human dignity,” he replied. “God has disappeared.”

Yusuf al-Qaradawi was born on Sept. 9, 1926, in the Nile Delta village of Saft Turab, the only child in a farming family. When he was 2, his father died and he was sent to live with his uncle, who became impressed with the boy’s ability to memorize long passages of the Quran.

Mr. Qaradawi was enrolled in a religious school in Tanta, about 60 miles northwest of Cairo, to prepare for Cairo’s al-Azhar University, regarded as the center of Sunni Muslim scholarship.

In Tanta, Mr. Qaradawi’s first encountered the ideas of the Muslim Brotherhood, which was fast becoming a political force in Egypt between the world wars. Mr. Qaradawi often recounted how he was spellbound by a lecture from the group’s founder, Hassan al-Banna.

The Muslim Brotherhood soon faced crackdowns by authorities worried about its rise. In 1948, it became a hunted group after a follower assassinated Egypt’s prime minister, Mahmoud an-Nukrashi Pasha. Banna was then killed by suspected government loyalists.

Mr. Qaradawi graduated from al-Azhar in 1953 and became active in Brotherhood affairs. He was arrested and jailed at least three times, during which he claimed he was tortured. In the early 1960s, he left Egypt for Qatar, where the ruling dynasty offered him sanctuary and a position as an Islamic scholar.

In Qatar, Mr. Qaradawi publicly renounced some of the more radical elements of the movement. He rejected the teachings of renowned Muslim Brotherhood firebrand Sayyid Qutb, whose support of armed struggle helped give the ideological underpinnings for al-Qaeda, Egypt’s Islamic Jihad and, later, some leaders of the Islamic State.

The Arab Spring protests that began in 2010 seemed a capstone to his calls for political reforms across the Muslim world — although he was always careful not to encourage any dissent that would upset his patrons in Qatar.

“Our manner of protesting should reflect sense and reason,” Mr. Qaradawi said in a sermon in Doha in 2012.

He used Al Jazeera to rally behind groups that overthrew and killed Libyan dictator Col. Moammar Gaddafi in 2011, and urged on demonstrations against Syrian President Bashar al-Assad, who managed to maintain control with the help from allies Iran and Russia.

In Egypt, Mr. Qaradawi made a triumphant return after President Hosni Mubarak was overthrown by protests in early 2011. “Don’t let anyone steal this revolution from you,” he told crowds in Cairo’s Tahrir Square. “Those hypocrites who will put on a new face that suits them.”

His prominence in Islamist circles rose even higher when presidential elections in 2012 brought Muslim Brotherhood stalwart Mohamed Morsi to power. But many Egyptian activists and secular reformists strongly opposed Morsi and his allies, including Mr. Qaradawi.

Egypt’s military ousted Morsi in 2013 and opened a relentless purge against the Brotherhood. Mr. Qaradawi and his seven children were declared terrorists. His daughter Ola al-Qaradawi and her husband were arrested in 2017.

In 2017, in an essay published 100 days after his daughter’s arrest, Mr. Qaradawi offered words of encouragement and said Egypt was “punishing your father through you.”

“A day would feel like eternity,” he wrote. “These days of injustice will, if God wills it, become part of your past.” (She was released in late 2021, but her husband remains jailed.)

In addition to Ola, Mr. Qaradawi is survived by his third wife, Aicha; three other daughters, Siham, Ilham and Asmaa; three sons, Mohamed, Abdel-Rahman and Osama; and 12 grandchildren. Many of his children studied at British or U.S. universities.

Mr. Qaradawi spent his recent years working on a unified compilation of his books and representing various organizations, including the International Union of Muslim Scholars.

In a 2004 interview, Mr. Qaradawi reflected on the power of television to give him a voice that few other could match. He was unabashed about seizing the chance.

“There are some preachers who can shake the very pulpit but cannot write. I know some sheikhs like that,” he told Arab Media & Society in 2004. “Some people can write very well; but put them up in the pulpit and they stutter and stammer. They can’t perform. … I think Allah has granted to me something of both.”