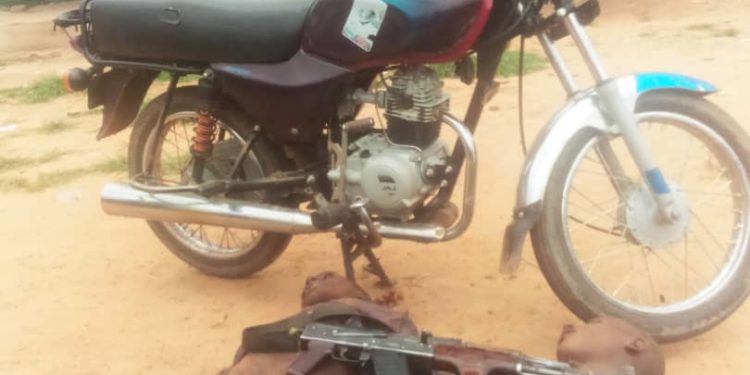 The Kaduna State Police Command said its operatives killed two bandits and recovered one AK47 rifle, a motorcycle and a matchete in Timburku village of Giwa local government area of the State.

The Police said the success of the operation was as a result of timely information provided by citizens and swift response by security operatives.

According to a statement issued by the spokesperson of the Command, DSP Muhammed Jalige, he said  upon receipt of a report through the DPO Kidandan on Saturday, July 23, 2022 at about 0800hrs that some bandits have kidnapped an unspecified number of farmers working on their farms at Timburku village, Galadimawa Ward of Giwa LGA, the Commissioner of Police, CP Yekini Ayoku, immediately directed the mobilisation of the nearby detachment of Police Operation Restore Peace (hitherto codenamed as Operation Puff Adder II) to the area.

He further said that, in an hot engagement that ensued with the armed hoodlums, the professional team of Police men prevailed with their superior fire power leading to the killing of two of the bandits, recovery of one AK47 rifle loaded with two rounds of live ammunition, one motorcycle and a machete while the kidnapped farmers were rescued unhurt.

“It is germane to reiterate that this operational breakthrough could not have been achieved without the timely report/information by the citizens and of course swift response from the Police.

“The Commissioner of Police, therefore, once again enjoins the general public to always confide in the Police and other sister security agencies to promptly report any distress situation as he assures them of speedy and effective response,” the PPRO said.

The Police spokesperson added that investigation into the incident has since been instituted while surveillance and patrol were on high gear to forestall any further incident as normalcy is restored in the affected area.

“The populace is as well enjoined to provide information on any person or group who are found nursing bullet wounds,” he stated.

7 Incredible Health Benefits Of Strawberries And Why You Should Eat More... Click Here For Details
Tags: BanditsKadunaPolice
SendShareTweetShare
Previous Post