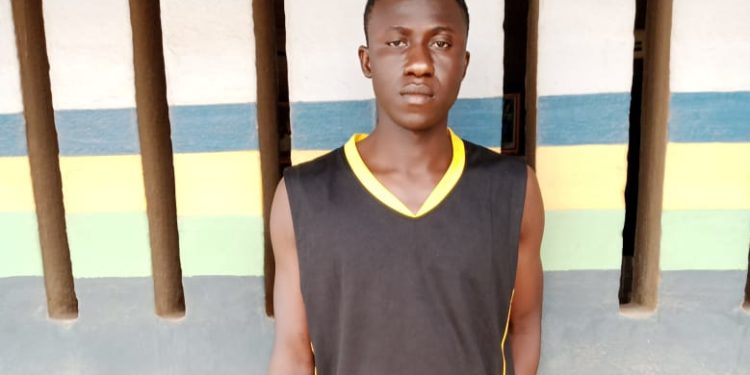 Operatives of the Ogun State Police Command have intercepted one of the inmates, who escaped from the Kuje Correctional Center in Abuja, following terrorist attack on the facility on Tuesday, July 5, 2022.

The 28-year-old escapee, Yakubu Abdul-Mumuni, was arrested in Sango-Ota, Ado-Odo/Ota local government area of the State, following an information received by the Police at Sango Ota Divisional Headquarters that the convict was sighted somewhere around the axis.

The Command’s Public Relations Officer (PPRO), Abimbola Oyeyemi, who confirmed the arrest, said the escapee was intercepted on Monday, two days after the Eid-el-Kabir celebration.

“Upon the information, the DPO Sango Ota Division, SP Saleh Dahiru, quickly moblised his men and moved to the area where the convict was apprehended,” Oyeyemi said.

Though details of how the escapee found his way down to the South-West before he was finally intercepted at Sango Ota still remains sketchy, Oyeyemi, however, explained that the escapee has confessed to the Police that he actually escaped from the Kuje Medium Security Custodial Center when the facility was attacked two weeks ago.

He stated further that he was convicted by a Kogi State High Court on offence of conspiracy and culpable homicide and sent to Kuje Correctional Center in Abuja.

The PPRO further disclosed that the State Commissioner of Police, ‘Lanre Bankole, has ordered that the escapee be immediately transferred to the State Criminal Investigation and Intelligence Department (SCIID) to facilitate his transfer to the Kuje Correctional Centre in the Federal Capital Territory (FCT) Abuja.

LEADERSHIP checks show that the escapee, Abdul-Mumuni, was not part of the 69 inmates, who also escaped from the facility and declared wanted by the Nigeria Correctional Sercive (NCoS) over connection to terrorism cases.