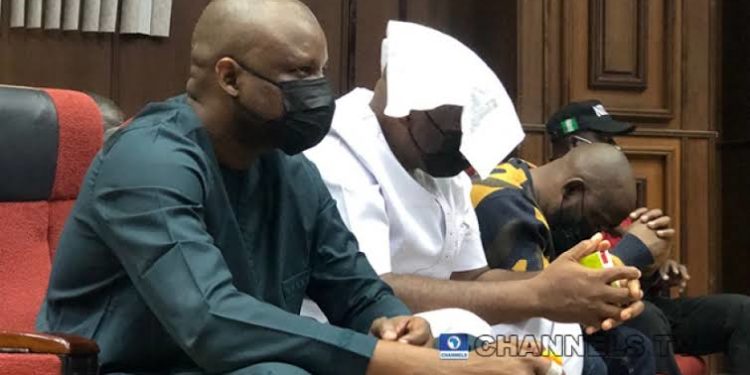 A constitutional lawyer and rights activist, Kayode Ajulo, has appealed to the federal government to do everything possible to protect the life of the suspended Deputy Commissioner of Police, Abba Kyari, saying he was one of the prime targets in the attack on Kuje prison.

The Kuje Correctional Center, was on Tuesday attacked by people said to be Boko Haram terrorists, according to the Defence Minister, Bashir Magashi.

Magashi had visited the prison on Wednesday, less than 24 hours after the attack, where he took a tour of the facility.

The Minister confirmed no Boko Haram terrorist could be seen as they had all escaped.

The President, Muhammadu Buhari, later visited the prison where he expressed apprehension at the intelligent failure, which could have thwarted the attack.

The attack led to the death of five people while many others were injured, with reports that DCP Kyari was a target of the terrorists who came in large numbers.

Consequently, Ajulo noted in a statement issued on Friday in Abuja that the attack portends danger for the highly revered corp.

While many prisoners used the opportunity provided by the attack to escape, Abba Kyari was part of inmates that refused to escape even as the invaders broke the entire prison doors for all inmates to escape.

Ajulo said it is important to grant Kyari bail as the allegation against him is bailable in law and he is kept for 5 months in Custody without bail for somebody of his status that has served his country extremely well and everybody knows he will never jump bail as he has demonstrated by refusing to escape when Kuje Correctional center was completely opened for everybody to escape freely last Tuesday. He added Kyari can’t continue being kept in the midst of those who would want him dead.

“His presence is more than his absence. He has done thousands of good to his country by arresting and bringing to Justice thousands of hardened and deadly criminals to book like never before in the history of the Nigeria Police.

“Arrest of Major Kidnap kingpins such as Evans, Vampire, Wadume, Ability, Halti, Yellow, Collins eze, among many others, as well as many deadly armed robbers such as Godo Godo, Ndagi, King Miracle, terrorist leaders like Umar Abdulmalik, Abubakar Musa, Abu Jamal, Abu Mustapha and many murderers and bandits commanders were also arrested and brought to book by him.

“Infact, 60% of inmates in Kuje got there by him and you know what that means for him living amongst them,” Ajulo said.

The lawyer disclosed that a reliable source within the prison confirmed that “two of the inmate terrorists Commanders already Serving jail term who threatened Kyari 3 months earlier after their Rescue Tuesday evening led a group of the gunmen to the cell of Kyari and his men, shouting his name Abba Kyari and saying they will kill him and Behead him while shooting heavily towards the cell.

“God saved him because the 2 explosives they used on his cell door didn’t explode. If they have succeeded in blowing up that door, Kyari would have been history by now.

“Kuje Prison has a capacity of around 550 but detaining about double of its capacity, many of which are high profiled criminals. And you have the man who was responsible for their arrest in their midst, waking up to their vengeful faces everyday. It’s either the court grant him bail or relocate him to a more secured government facility to protect his life.

“I have said this before, not as his lawyer but as a concerned citizen and rights activist, that it is a threat to his life to keep him in the same prison with many of the criminals he arrested and sent to the same facility,” Ajulo said.

It's Time To Demystify Myths Against Women, Says Sanwo-Olu’s Wife