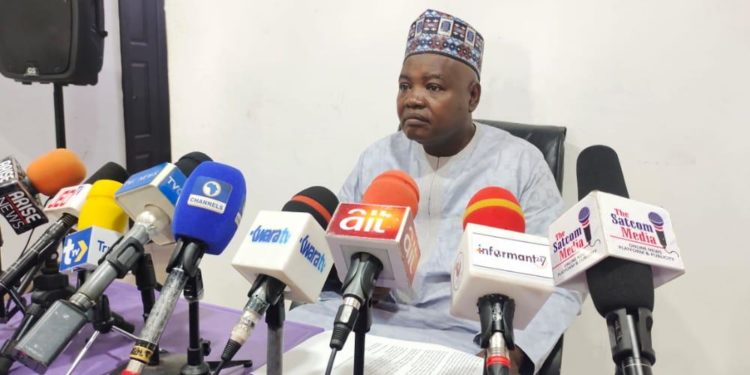 Kwara State government, on Tuesday, said it has uncovered a grand plot by opposition figures to destabilise the state through a coordinated smear campaign against Governor AbdulRahman AbdulRazaq and some other government functionaries.

The Special Adviser to the governor on Political Communication, Alh. Bashiru Adigun, disclosed this at a news conference in Ilorin, the state capital.

Adigun accused some opposition politicians of desperate attempts to smear the image of Governor AbdulRazaq, using falsehoods of various kinds, including doctored documents, unverified claims, fake videos and other disinformation to mislead the public.

“We have invited you to this news conference to draw your attention to a plot by some opposition elements in the state, including the Peoples Democratic Party (PDP) and their allies, to smear the governor and some other top government officials with falsehood in their desperate bid to return the state to backwardness and wanton diversion of public funds and resources for their private use .

“They plan to begin heavy use of some media platforms, including online media, to attack the government using all sorts of salacious tales that only exist in their imagination. We are aware that some mischievous elements are trying to rehash the long dismissed tale of N300m LG funds purportedly missing.

“The interesting thing is that the only source to whom they credit this phantom claim has since retracted the claim on a number of occasion. As a government that cared about accountability, the government set up a probe panel which thoroughly investigated the matter. Various persons and government departments made presentations to the panel and the finding was that there was nothing like anyone diverting any money from local government.

“For the avoidance of doubt, the panel headed by retired Justice Mathew Adewara said it found no evidence that any money was missing whatsoever. Before then, on July 20, 2020, the former commissioner who was alleged to have made the claim said no such thing ever happened.

“Despite all these, some elements are bent on misleading the public in the name of politics.

“It is important to state that funds accruing to LGAs are barely enough to pay salaries and other obligations. On many occasions, the state government has had to come through for the local government so that everyone will get 100% salary. It is therefore absurd for anyone to rehash any tale of any missing funds,” Adigun stated.

“It is to the credit of this administration that it gives free hands for officials to do their job. It is also necessary to inform the mischievous elements that audit query, as a standard practice, is not an indictment in itself. It is a call to action that certain steps must be taken in line with the global best practices, which this administration follows. To be clear, at no time did the Auditor General or anyone alleges fraud against the administration.

“The Auditor General has cleared the Government of any wrongdoing. It is important to clarify however that there is no law that says the government needs the permission of the Auditor General to spend money already appropriated by the House of Assembly. What the law requires is that such expenditure must be retired and that was clearly done as confirmed by the former Auditor General.”