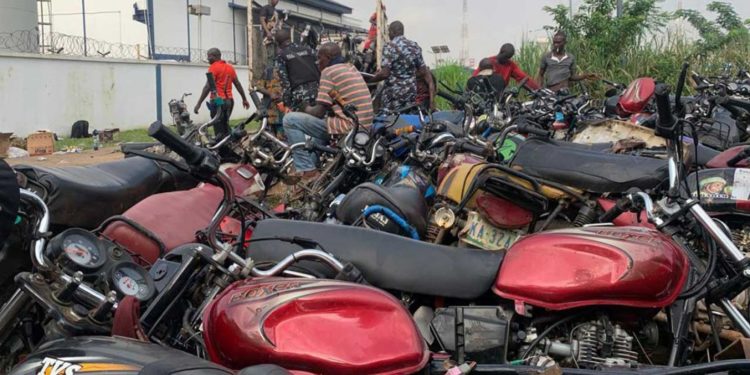 Chairman of the Lagos State Taskforce Shola Jejeloye, a chief superintendent of police, has said that the agency will today Friday crush another set of 2,228 impounded Motorcycles to further make the enforcement of the ban on commercial motorcyclists popularly known as Okada thorough and effective in the state .

Lagos State Governor Babatunde Sanwo-Olu had announced a total ban on Okada on all highways across six local government areas and nine local council development areas  of the state.

Speaking to journalists in his office at the headquarters of the agency at Bolade, Oshodi, Jejeloye highlighted that the agency has been carrying out crushing of bikes in the past, saying the last of which was on 25th of May,2022.

According to him, the agency would further intensify its effort in ensuring that all impounded Okada are crushed after following the due process of Traffic Laws as enshrined in Lagos State Transport Sector Reform Law of 2018.

The chairman stated that the laws are very clear for the Okada operators to see that their actions are in complete violation of the transport reform laws of the state that “No two persons shall ride, drive or propel a motorcycle or the tricycle on a major Highway within the state, and any person in contravention of this provision commits an offence and will be prosecuted.”

Jejeloye added that the agency’s efforts had been doubled since the June 1st ban even though the compliance rate is very high and encouraging.

He said the Okada operators are not to be trusted, pointing out that,’’ their style of operation is synonymous to a guerrilla -warfare when we retreat, they advance, and when we advance, they retreat, but enforcement on the ban has come to stay.

“We will ensure not a single offender operating his okada on the Highways will be spared. We will keep watch and continue patrolling the affected parts of the State to ensure they do not get back on our roads.”

A group of commercial motorcycle riders under the umbrella of the Motorcycle Transport Union of Nigeria (MTUN) have urged a Federal High Court in Lagos to declare that the ban on their activities by the state government is illegal, unlawful and unconstitutional.

The applicants also want the court to grant them an order compelling the government to provide jobs for the teeming commercial motorcycle riders in the state.

They further asked the court for a declaration that the “purported proposed ban of the commercial motorcycle transportation in Lagos State by the governor, without hearing from the operators whose rights are affected or likely to be affected is a violation of the constitutional rights of the applicants to fear to hear provided for and encapsulated in Section 36 of the Constitution of the Federal Republic of Nigeria, 1999 as amended.’’

In an affidavit filed in support of the suit which was sworn to by one Pastor Emmanuel Donatus, the applicant stated that he and other operators had no means of sustenance apart from the business of Okada.

Donatus said that the government ought to restrict Okada operations on major highways to “approved areas”, rather than banning their operations.

He added that during the regime of the former governor Babatunde Fashola (SAN), the union was engaged by the government on how to regulate their operation in the state, including issuing identification cards to members and others.

While the defendants are: the Lagos State Governor Babajide Sanwo-Olu, the state attorney-general and commissioner for justice, Moyosore Onigbanjo (SAN) the commissioner of police, Abiodun Alabi.

The suit is yet to be assigned to a judge.