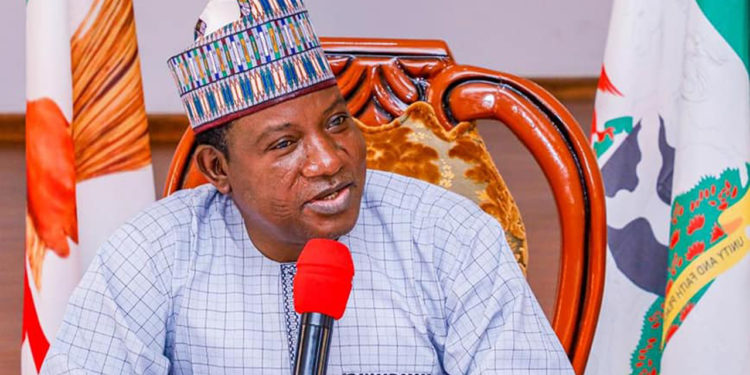 Christians across all denominations in Plateau State converged on the Rwang Pam Stadium, Jos yesterday for a solemn assembly to pray to God for peace, progress and stability in the state and Nigeria at large. Governor Lalong who addressed the gathering organised by Christian Denominational Leaders in conjunction with the state chapter of the Christian Association of Nigeria (CAN), said the solemn assembly came at a time when the peace and progress of Nigeria and the state had become a serious challenge.

He said, “Looking at the level of wickedness and manifestation of evil that is threatening our peaceful coexistence and the safety of lives and properties, the call to prayers and repentance is a collective one that emphasizes soul-searching by everyone. This is because the challenges we face today cannot be said to be the fault of only a few persons only. Similarly, the efforts to restore the fortunes of our state and country cannot be carried out by a few persons alone.”

Lalong said in order to build a better Plateau and a greater Nigeria, citizens must shun all acts that are capable of threatening humanity which is God’s creation.

He regretted that many times, people allow ethnicity, religion, denominational differences, politics, pride, money, greed and selfishness to take control of their lives to the point that they treat people as if they were not created by the Almighty God.

He called on all Christians and indeed the entire citizens of Plateau State irrespective of religious or other differences to do their part in sustaining the achievements that have recorded in creating an atmosphere for peace, dialogue, forgiveness, and reconciliation during the last seven years of his administration.

On the 2023 general elections, he said “As we move deeper into the political spectrum, I wish to advise our citizens to use the moment to work together for a better Plateau.

This is the time to pray to God and actively participate for the emergence of the right set of leaders that will take over the affairs of our State and country in 2023. Let us do away with politics of hatred, bitterness, violence, character assassination and fake news.”

In a sermon, ECWA president and chairman of the Forum of Christian Denominational Heads Plateau State, Rev. Stephen Panya Baba, said the state is a land blessed by God in all ramifications with great people and abundant resources that are second to none in Nigeria.

He said Plateau had remained the hope of salvation for the North and other parts of Nigeria having pioneered and continuously promoted the work of evangelism and spread of the gospel of the Lord Jesus Christ to the unsaved.

Although he noted that the state and its people had been under attack by forces of evil who had killed and destroyed properties of innocent citizens, the wonderful heritage bestowed on Plateau by God would never be taken away if the people return to God and continue to obey the Lord, love one another, and seek to do His will at all times.

The COCIN president Rev. Dr. Amos Mohzho, said the Church on the Plateau is united to address the spiritual, social, political and economic fortunes of not only its members, but of the entire citizens.