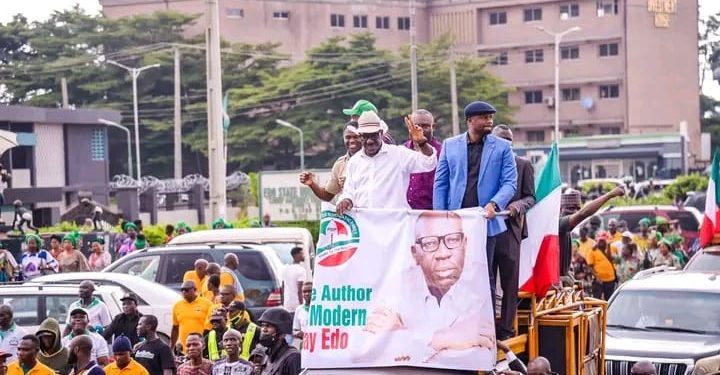 Edo State governor, Godwin Obaseki, has praised his deputy, Comrade Philip Shaibu, for tackling security, flooding and other challenges in the State in his absence.

Obaseki had proceeded on a three-week annual leave, and handed over power to the State’s deputy governor, Shaibu.

During the three-week vacation, Obaseki took time to join the Peoples Democratic Party (PDP) governorship campaign in Osun State until the conduct of the election exercise and eventually victory of the party’s governorship candidate, Senator Ademola Adeleke.

On return to Benin City, the state capital on Tuesday, Obaseki, who took his verified Facebook page, said he returned to a rousing welcome by Edo people amid praises for Shaibu.

The governor wrote: “Today, after three weeks of annual leave, I returned to the state capital amid a rousing welcome by supporters and other Edo residents.

“During my time away, I was in Osun State with other leaders of our great party, the Peoples Democratic Party (PDP), where we played critical roles in the eventual victory of Senator Ademola Adeleke, our candidate in last Saturday’s Osun gubernatorial election.

“I thank my deputy, Rt. Hon. Comrade Philip Shaibu, who acted in my absence and addressed security and flooding challenges, among other issues that arose in my absence.”