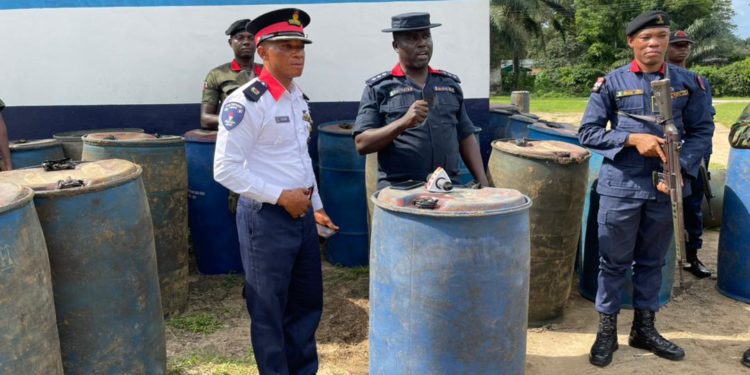 Troops of Sector 4 of Operation Delta Safe (OPDS), on Wednesday, in Calabar, Cross River State capital, handed over 23 drums of diesel to authorities of the Nigerian Security and Civil Defence Corps (NSCDC).

Speaking during the handing-over of the diesel by Troops of Section 4 of Operation Delta Safe in Calabar, NSCDC Deputy Superintendent, Sani Sa’ad, who doubled as Component Commander, NSCDC in OPDS, stated  that the product was seized in Ikang area of Bakassi LGA of the River State during their routine patrol.

OPDS is a joint security operation set up to protect oil and gas infrastructure, prevent oil theft, sea theft and to also halt militancy in the creeks and its envrions.

Sa’ad stressed that the arrest was done based on credible information given to the troops by concerned individuals.

Findings by our correspondent, however, revealed that the product was being conveyed to militant camps in Ambazonia in the Republic of Cameroon.

He added that the troops of operation Delta Safe working on a tip-off, swung into action, forcing the suspects to flee upon sighting operatives of the OPDS.

The Component Commander averred that the intention of the militants to move the product to the Ambazonia camp in the neighbouring country was illegal.

Sa’ad maintained, “We have 23 drums of diesel here; the product was arrested on July 31, 2022. We are here to hand over the product to NSCDC for onward investigation and prosecution.

“For us, our procedure is to hand over the product to NSCDC because they are the relevant security agency saddled with the responsibility to handle such cases,” he said.

In his remarks, NSCDC Public Relations Officer (PRO) in Cross River State, Mr Solomon Eremi, while  receiving the seized product, on behalf of the State Commandant of NSCDC, Mr. Samuel Fadeyi, commended men of OPDS for the giant stride, stressing that there would be a forfeiture of the product since the suspects had ran away.

“We are going to do the needful as regards this product.

“But, in this case where the suspects all ran way, there will be a forfeiture of the product because we are going to hand it over to the government.”