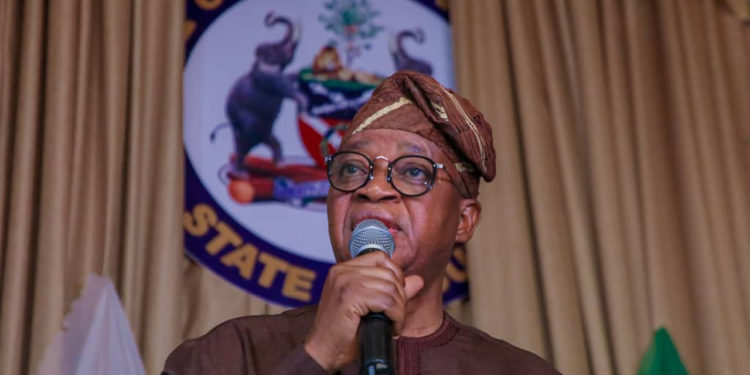 He added that APC victory would enable him to build on achievements recorded so far since assuming leadership of the state.

The governor said this during an engagement meeting with Osun Chapter of All Farmers Association of Nigeria (AFAN), yesterday in Osogbo.

Represented by his special adviser on Civic Engagement, Mr Olatunbosun Oyintiloye, the governor, appealed to the electorate not to be deceived by desperate politicians.

Oyetola, who noted that he had been serving the state diligently since he assumed office, said those who lacked administrative capacity must not be allowed to truncate the development the state is currently witnessing.

He appealed to the electorate to resist the temptation of selling their votes, adding that they should not allow those who have declared to win the election with dollars and euros, disrupt the steady growth Osun is recording.

Oyetola assured that he will never renege on his campaign promises, adding that the general welfare of the masses will continue to be his utmost priority.

The governor also warned politicians against involvement in violence, adding that the election should not be seen as a do-or-die affair.

He said that anyone caught perpetrating violence before, during and after the election will be dealt with in line with the law.

In his remarks, AFAN Chairman, Mr Suleiman Araokanmi, commended the governor for his various interventions in agriculture sector in the state

Araokanmi, however, appealed to the government to give more farm inputs to farmers to enhance more food production and pledged the support of the association for Oyetola’s re-election.

Atiku Preaches Against Toxic Campaigns Ahead Of 2023 Polls