The Kaduna State Traffic Law Enforcement Authority (KASTLEA) has been controlling traffic, enforcing compliance to traffic rules and ensuring sanity on roads in the last seven years. In this interview, Major GARBA YAHAYA RIMI (rtd), the Corps Marshall and Chief Executive Officer of KASTLEA, highlights the successes and challenges of the Authority. 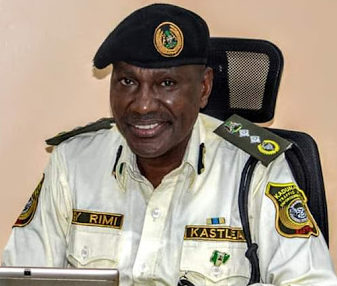 Last year, Kaduna State Government banned the use of motorcycles, whether commercial or private. Has the ban been reviewed because I see so many motorcycles plying the road?

First of all, we have to look at the laws. If you check, we have three different types of laws banning commercial motor bikes in Kaduna state. The first was the one that banned commercial motor vehicles in 2014, which was reviewed in 2017. The law stated clearly that any motor bike that has a passenger, is considered to be a commercial motor bike. The ban covered 11 local governments out of the 23 local governments in the state. The law does not discriminate whether or not the motorcycle is a private one; so long as you convey a passenger, you have committed an offence. The rider is supposed to pay N10,000 or to spend three months in prison or the two punishments can be combined. The passenger is to pay N5,000 or one month in prison or both.

There was another law during the Covid-19 pandemic, whereby if a motorcyclist didn’t wear a face mask or the passenger that he is conveying didn’t wear one, the offender or offenders will be charged to court. Then, the judge will prescribe the necessary punishment. The fine was between N1,000 and N2,000, so most of the offenders just paid and continued committing the offence until there are caught again. In order words, the fine was not a deterrence. So, the government decided that offenders’ bikes should be seized until we get another directive on what to do with them.

The third law is the Security Containment Order which was issued last year. The first one lasted three months. The order was not restricted to the ban on motorcycles alone; there were about eight issues contained in it. Apart from ban on riding motor bikes, people were also banned from going to the bush to cut trees for firewood for sale. Also, filling stations were restricted in selling fuel; they were to sell from 7am to 6pm. Also, Keke Napep riders were allowed to ply the road from 6am to 7pm. In some local governments, telecom services were suspended. Black marketers who buy petrol in gallons and sell by the roadside, were also banned. After the first three months, the Commissioner of Internal Security and Home Affairs extended the order and no time frame was given. A Task Force which is headed by the Commissioner of Police was constituted. The Kaduna State Transport Law Enforcement Authority (KASTLEA) was only a member of the Task Force.

Is the Task Force still working?

Well, the government has not disbanded the committee. It is only when it says that the Security Containment Order has been lifted and the Task Force has been disbanded, that is when we will say that it is not working. The Commissioner of Police who is the Chairman of the Task Force, has not notified us that it has been disbanded. So, we are continuing with what we were asked to do.

Is seizure of the motor bikes of offenders part of the sanctions that should be meted out to defaulters?

Yes, of course. We were told to seize and wait for further directives from the government.

Is it true that government has given directive to KASTLEA to release the motor bikes?

Well, I have not heard of that. I believe that if the government had given that directive, a circular could have been sent to us or to the Commissioner of Police, who is the Chairman of the Task Force, or may be to my supervising Commissioner of Public Works and Infrastructure. But I know that there is a process that is going on now but we are yet to receive any directive. But I believe that if the committee has finished its sitting, the government will come out clearly to announce to all citizens of Kaduna state, its directive on these seized bikes.

Is there a possibility of fining the offenders and releasing their bikes, instead of just keeping the bikes?

Well, I can’t say anything because I’m not the governor; he is the only one who can give that kind of directive. If the government says that they are going to be fined, I have no option than to go by the directive. If it says that we should not release them, we are not going to release them. But the moment he gives us a release letter, I will surely comply.

Most people don’t know the exact mandate of KASTLEA. Is it a traffic control and enforcement agency or a road safety authority? Or a revenue generating unit of Kaduna State Government?

The mandate of this Authority is to make sure that we prevent accidents in the state. And that is why our responsibility is divided into two. There is the social services and enforcement. In providing social services, we don’t have any challenge because we try to control traffic flow within the state. We have about 17 zones and units across the 23 local governments in the state. We clear the road if there is a broken-down vehicle, so that we can have free flow of traffic. At the same time, if there is an accident, we use our ambulances to convey the wounded to the nearest medical centre where they can get proper attention, that is after administering First Aid treatment. We also evacuate the dead. Also, you can even see our Marshalls stationed around schools. We do that in order to help children to cross the road. We also assist aged people. These are all social services.

When it comes to enforcement, that is where we have some challenges. This is because when you try to change the mindset of Nigerians from doing the wrong thing to doing the right thing, you tend to have problems. What we are asking people to do is simple; they should not overload their vehicles, they should not speed excessively, drive with seat belts on, don’t beat traffic light. So, when you are trying to enforce all these rules, you have challenges. But it is our responsibility. We are doing so to ensure that there are less accidents on our roads.

We are not a revenue generating agency. But if you check the behaviour of Nigerian road users, there is no way that you cannot fine offenders. In that way, you will generate a little revenue for the government. But we were not set up to generate revenue per se. If someone beats traffic light, and he is arrested, he has to pay a certain fine which is stated in the law. And the fine goes to the government coffers. But if Kaduna state road users abide by all traffic regulations, with no one beating traffic, no one over speeding, no over loading and all vehicle documents are up to date, we will not arrest anyone. So, we will not generate any revenue.

Some of the activities of your Marshalls while enforcing traffic rules have raised a lot concerns. For example, is removing of the number plates of offenders backed by law?

The law allows us to remove number plates; why we do that is because you may not need to pay your fine on the spot. If you are in a haste, we will allow you to go but we will remove your number plate. Afterwards, you will meet our officials in the office with your booking ticket. And when you pay the fine, we will release your vehicle. So, what we are doing is backed by KASTLEA law.

-Kaduna State Traffic Law Enforcement Authority (KASTLEA) was established to direct and control traffic on public roads as well as decongest them;

-KASTLEA Marshalls are mandated to inspect vehicles and issue certificates of road worthiness, impound vehicles that are not properly parked or those causing traffic hold ups;

-The registration and licensing of driving schools and conducting of driving tests, including issuing learners’ permits and drivers licenses fall within the authority of KASTLEA;

-Marshalls can impound overloaded vehicles, ensure the installation of road traffic signs, educate and enlighten vehicle users and the general public on the proper ways to use roads;

-They are expected to provide emergency towing services for broken down vehicles that obstruct the free flow of traffic;

-KASTLEA is expected to safeguard roads from encroachment of markets, motor parks and activities of street traders, hawkers and beggars;

Cristiano Ronaldo Could Be On His Way Out Of Manchester United