Outrage In Pakistan After Attack On Journalist, Day After He Called Army Generals ‘Property Dealers’ 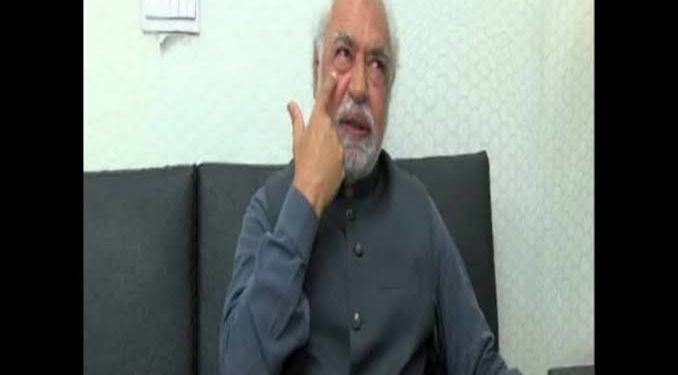 A prominent human rights organization in Pakistan has condemned the assault on senior journalist and former parliamentarian Ayaz Amir by unidentified people that led to outrage in the country.

“HRCP condemns the assault on senior journalist and former parliamentarian Ayaz Amir by unknown persons. We see it as another cowardly act intended to silence independent voices. HRCP demands an investigation and those found responsible for this act must be brought to book,” said Human Rights Commission Pakistan in a statement.

Amir on Friday was assaulted by unidentified assailants in Lahore when he was coming back home.

While describing the incident, Amir, with bruises on his face, said that his car was intercepted by a vehicle while coming back from the office after recording his television show for Dunya News.

“A man wearing a face mask emerged from the vehicle and collared my driver,” Amir said as quoted by Dawn newspaper.

“As I questioned the man, a couple of other men also arrived by my side, opened the door of my car and unleashed blows to my face, and dragged me out of the vehicle,” he added.

Amir said that the men also resorted to assaulting him on the road. He further said that since it was a crowded road, people began gathering and the attackers then made off with his mobile phone and wallet.

The incident comes just a day after Amir delivered a speech at a seminar, which was also attended by Pakistan Tehreek-e-Insaf (PTI) Chairman Imran Khan, organized by the Islamabad High Court Bar Association on the topic ‘Regime Change and its Fallout on Pakistan’, the Dawn newspaper reported.

In his speech, Amir criticized the role of Pakistan’s military establishment and also pointed out the mistakes of Imran Khan during his tenure as the country’s Prime Minister.

“I condemn in strongest terms the violence against senior journalist Ayaz Amir today in Lahore. Pak descending into the worst kind of fascism with violence & fake FIRs against journalists, opp politicians, and citizens. When the State loses all moral authority it resorts to violence,” Imran Khan tweeted.

Punjab Chief minister Hamza Shehbaz took notice of the assault and sought a report from the inspector general of the Punjab police.

In a statement, he said the attackers would be arrested and dealt with soon, reported Dawn.

“The incident is highly condemnable. The dispensation of justice in the case will be ensured,” the chief minister added.

Journalists, lawyers, activists, politicians and members of the civil society strongly condemned the attack on Amir.