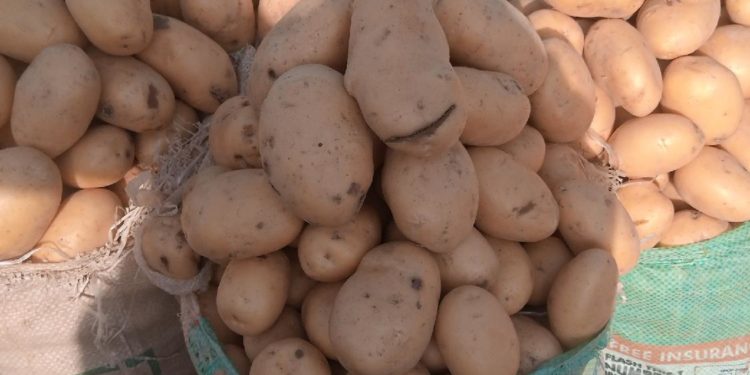 Plateau State Irish Potato farmers have lamented the destruction of their tuber crops worth millions of naira by a plant disease known as potato blight.

They called on the state government to urgently look into the plight of the farmers by compensating them in any way they can for the losses incurred.

Comrade James Nyango and Da Yohana Chuwang made the plea on behalf of potato farmers while speaking to our correspondent in Jos yesterday.
80 per cent of Irish potatoes consumed in Nigeria is produced in Plateau North and Central Senatorial district of the state.

According to the duo, many hectares of Potato farms have been lost to the deadly Blight that is causing farmers nightmares over the years.

“It is no longer news that Irish potato farmers in Plateau state are not smiling. They have suffered great incalculable losses running into millions of naira due the destruction of their potato farms by plant disease called blight,” they said.

They pointed out that prior to the disease, potato farmers were very optimistic of bumper harvest this year as their potato farms were very greenish, but however, their hope was cut short as Blight started ravaging the Irish potato plants when they just started producing Irish seedlings.

“Virtually all Irish potato farms in Plateau North and Central have been destroyed by this disease, leaving the farmers with nothing to harvest.”
Farmers who farm Irish potatoes for commercial and consumption purposes have suffered great losses due to potatoes’ Blight this 2022 cropping season”.

Nyango further explained that all potato farms in Vom in Jos South and other places have been destroyed by Blight. He added that as it stands, these great losses will negatively have a ripple effect on maize, millet, guinea corn and other crop’s yield which will undoubtedly lead to food crisis.

They argued this is because virtually all farmers buy fertiliser with the money they make from Irish potato sales to apply to the above-mentioned crops which are still growing. He called on the state government to intervene to prevent food crises in the state and the country at large.