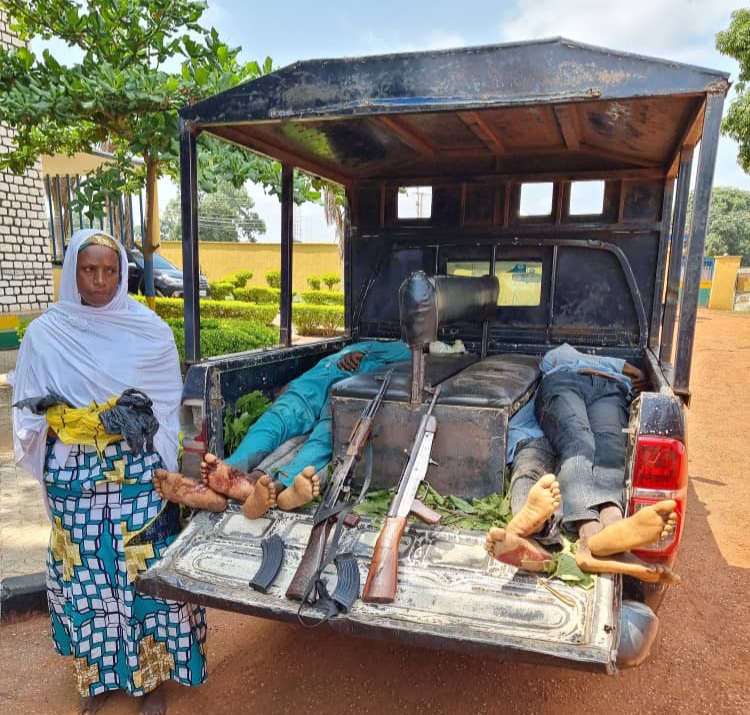 The Kaduna State Police Command said its operatives have killed four bandits in a gun duel and arrested a female supplier of arms and ammunitions in Kaduna.

According to the command spokesperson, DSP Muhammed Jalige, in a statement on Thursday, said the success was sequel to sustained onslaught against banditry and other criminal elements in the State by the operatives of the Special Tactical Squad Force Headquarters, Abuja (STS) in conjunction with Operation Yaki of the State Command on June 15, 2022 at about 0650hrs while on the trail of suspected bandits intercepted their target along Saminaka–Jos expressway.

He said they were arrested in a Sharon vehicle, blue in colour and driven by one James Dawi, aged 31-yrs old of Vom town in Jos South LGA of Plateau State.

He said the suspected bandits on sensing an unavoidable danger posed in their way to deliver some dangerous weapons to their cohorts, immediately engaged the operatives in gunfire sporadically.

The PPRO said, however, that the operatives with tactical precision were able to terminally injure four suspects. The injured suspects were evacuated to Barau Dikko Teaching Hospital Kaduna where they were pronounced dead by a medical doctor.

DSP Jalige disclosed that the encounter lasted for about 30 minutes and subsquently the fire power of the Police forced the bandits to retreat into the forest with bullet wounds.

“When search was conducted in the vehicle and around the vicinity, the following exhibits were recovered, one Ak49 rifle loaded with six rounds of live ammunitions, Ak47 rifle, one empty magazine, one hundred and thirty four rounds of different calibers of live ammunition and operational motor vehicle.

“The operation led to the arrest of a female accomplice whom during the course of investigation confessed to be supplying arms and ammunition to bandits within Kaduna State, meanwhile discreet investigation into the case has been instituted with a view to unravelling the identities of other criminal gang as well as finding the source of these dangerous weapons in order to avert future occurrences and made the criminals to face the full wrath of the law,” he added.

He said, the Commissioner of Police, Kaduna Command, CP Yekinin A. Ayoku, has applauded the clinically executed intelligence-led tactical operation that led the the breakthrough, adding that he has assured the good people of Kaduna State that the Command will be unrelenting under direction of the Inspector General of Police, robust support from the State Government and active synergy with other security agencies in the fight against the enemies of collective security.

The Commissioner equally called on members of the public to continue to support the Police with useful information about all and sundry criminal activities as Police under his watch would promptly treat such information with dispatch and absolute confidentiality.