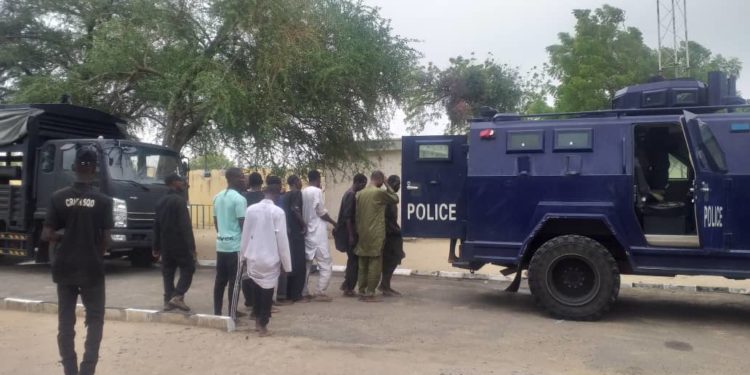 Parading the suspects at the Police headquarters in Maiduguri, the Commissioner of Police, CP Abdu Umar, said the Boko Haram accomplices who are mostly internally displaced persons (IDPs) were tracked from the Force Headquarters in Abuja through their phone conversations with suspected terrorists.

On interrogation during the parade, one of the suspected female terrorist accomplices, who identified herself as Rashida Saleh, said her telephone conversation was with her relative called Dauda, but claimed that she had no idea of his whereabouts.

The remaining four suspected terrorist accomplices equally said they had no knowledge of whereabouts of the persons they communicated with.

He said on receipt of the information, the Police Rapid Response Squad (RRS) team led CSP Abioye Babalola in joint operation with the military, swiftly mobilised to the scene and that after heavy exchange of gunfire between the security team and the terrorists including aerial support by the Nigerian Air Force fighter jet, most of the terrorists were decimated.

In the same vein, the Commissioner of Police said on March 25, 2022, a suspected kidnapper, Mallam Abdul, was arrested by a team of local hunters at Ngorkoli village in Chibok local government area of the State for allegedly kidnapping one Ibrahim Mohammed of the same village, which a ramsom of N2 million was demanded.

He said the suspect was nabbed at the point of collecting the money, adding that on interrogation by the police, the suspect confessed to the crime and mentioned his accomplices with their gang leader, Garba Suleh, who is presently at large.

Similarly, the CP said sometimes in January, 2022 , the suspects; Lawan Nasiru, Musa Tukur, Samaila Hassan  and Garba Suleiman all of Hausari ward Maiduguri, lured a victim, 13 year-old  Halima Ahmadu and had carnal knowledge of her one after the other and on different occasions, and that the incident occurred at Hausari area in Maiduguri.