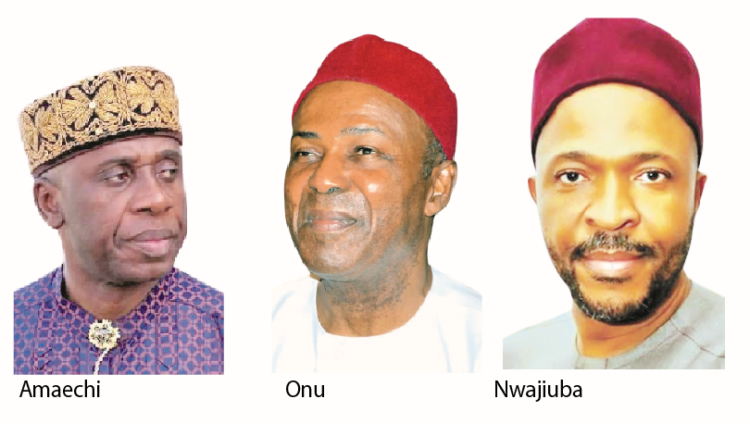 Despite feeling aggrieved and withdrawn from party activities in recent times, former ministers who resigned to contest the All Progressives Congress (APC) presidential ticket, yesterday, said they will remain in the party.

Top aides of the former ministers, namely Chibuike Amaechi (Transportation); Dr Ogbonnaya Onu (Science and Technology), and Emeka Nwajiuba (minister of state for Education), who admitted that their principals are not pleased with the way they were treated by the APC, however, said they will not dump the party.

Checks by LEADERSHIP revealed that the ministers have withdrawn from active party activities since they lost out in the party’s presidential primaries on June 8 this year.

However, checks by LEADERSHIP reveal that after the primaries, most of the ministers have been largely politically inactive in party activities.

While most of them have since not openly associated with the party’s candidate, former minister of Transportation, Chibuike Amaechi, had in July said some delegates, who voted at the special convention of the APC, were regretting their decisions after being induced with money at the convention.

It was also learnt that Amaechi was displeased with the budding romance between Rivers State governor, Nyesom Wike and APC chieftains, including governors of Ekiti, Ondo and Lagos, and the.

LEADERSHIP gathered that those visits were done without Amaechi’s consent. While Onu had openly upbraided the party for not zoning its presidential ticket to the South East during the convention, Nwajiuba, who stayed away from the convention in protest, subsequently filed a suit at the federal high court seeking the disqualification of Tinubu and the PDP presidential candidate, Atiku Abubakar, from the 2023 election.

However, their associates and supporters yesterday denied that the principals had been distant from the party even though they admitted that they are aggrieved.

They insisted they won’t dump the APC, noting that they are still party active party members.

Only PMB Can Say If Amaechi Was Fairly Treated – Aide

APC chieftain and close associate of Amaechi, Eze Chukwuemeka Eze, said the question of whether former minister of Transportation was fairly treated by the party will be answered after the end of the tenure of President Muhammadu Buhari in 2023.

Eze disclosed this while speaking with LEADERSHIP in Port Harcourt, the Rivers State capital.

He said, “It depends on who is answering this question. One thing most of us don’t understand is that the APC government, or party of which Amaechi is a key actor or contributor is or are still running until May, 2023. It is then one will be in a better position to answer this type of question creditably.

“Yes, it is true that if not for the inputs, sacrifices and risks that Amaechi took over the project APC, there would not have been the APC as it is today. Yes, it is also true that Amaechi midwifed the election and reelection of General Muhammadu Buhari as the president of the Federal Republic of Nigeria as the director general of the APC Presidential Campaign Organisation on two occasions, thereby becoming the first African or in the entire world to achieve such a feat.

“Yes, it is also true that the APC government accorded or assigned a lucrative Ministry of Transportation to Amaechi in which he established himself as one of our best brains and leader in Nigeria.

“It is also true that out of over 20 political leaders that contested the APC presidential election, Amaechi came second, beating a sitting vice president and a sitting Senate president and others showing his influence and acceptability within the ranks and members of the party.

“It is also true that Amaechi was one of those that was asked to resign before contesting the presidential slot of the party and was not reappointed based on the thinking of Mr. President, and only him alone and some of the leaders that can answer if Amaechi was fairly treated or not.

“To me, for us to truly assess or answer if Amaechi is fairly treated can only be answered at the end of this administration because I am still feeling that Amaechi has not been abandoned or forgotten by this administration; only time will tell.”

Acting publicity secretary of the APC in Rivers State, Darlington Nwauju, said Amaechi was still a member and leader of the party in the state.

Speaking with LEADERSHIP in Port Harcourt yesterday, Nwauju stated that Amaechi, who is also a former Rivers State governor, has been holding meetings with stakeholders to strategise for the APC in the 2023 general election.

He said: “The rumour about Amaechi defecting is a complete ruse. It is another stunt by enemies of the APC to distract our party by blackmailing the former transportation minister.

“He is undeniably one of the pillars of the party in Nigeria whose stellar outing as a cabinet minister will remain a point of reference for many years to come.

“The former governor has been meeting with different strata of the party’s stakeholders in Rivers State to strategize on helping the APC win next year’s election at all levels,” he said.

Findings by LEADERSHIP revealed that Amaechi was still actively involved in the activities of the APC in Rivers State.

Although, it took Amaechi almost two months after the APC presidential primaries, which he lost to Senator Ahmed Bola Tinubu, before he visited Rivers State, he has spent two weekends in the state in the past one month.

LEADERSHIP observed that during his visit to the state in August, the former Rivers State governor addressed APC stakeholders at the party secretariat along Woji Road in Port Harcourt.

The former minister was also in the state over the weekend for the funeral ceremonies of former four-time Minister of the federation, Alabo Tonye Graham-Douglas, in Port Harcourt, and at the deceased’s hometown, Abonnema in Akuku-Toru local government area of the state.

Speaking during the funeral service at Abonnema, Amaechi, who expressed worry at the abandonment of Graham-Douglas by the Rivers State government, said he expected the state government to show concern when the former minister became ill.

He said, “Alabo played a very important role in making Chief Rufus Ada -George governor of Rivers State. I didn’t know him. I met him after Rufus was made a governor. We escorted Rufus to this village. That was my first time in Abonnema.

“We came to see Alabo to thank him for the role he played in assisting Chief Rufus Ada-George to become governor of Rivers State. I came to know him later in the course of my political career.

“I know he was a very good man. I know Alabo is somebody you need to be proud of. I can say arguably that he was one of the best dressed Rivers men.

“When I became the governor of Rivers State, the very few places I visited was Alabo’s house and we took time to discuss the state. We agreed that let the past be the past and let us chart a new course. Alabo and I spoke for weeks on how to move the state forward.

“Indeed, when he fell ill, we expected that the state will take responsibility of everything concerning Alabo. You don’t need to be a governor for the state to recognise your contributions.

“If you know me well, I don’t like travelling during the rainy season due to bad roads, but I have no choice but to come to pay him the respect that he deserves.”

He however added that Onu’s camp has misgivings against the national leadership of the APC.

Speaking with LEADERSHIP in Abakaliki, the Ebonyi State capital, Alhaji Ajah said that as a leader of the party, Dr. Onu shortly after the presidential primaries in Abuja met with APC faithful both at his country home in Uburu in Ohaozara local government area and in Abakaliki, the state capital.

Ajah said the meeting held in April was held to assess the successes and other lapses recorded during the just concluded presidential and state primaries.

He noted that despite the misgivings by his political associates against the national leadership of the party, “we are still committed to the success of the party.

“I want to inform you authoritatively that our leader, Dr. Ogbonnaya Onu, is still in APC and does not have any intention of leaving the party. We met with him both at his country home in Uburu and Abakaliki after the presidential primaries. He has been very visible in the activities of the party in the zone and we will do everything to work for the success of the party.

“We meet to review the activities of the party and to discuss on the way forward. Dr. Ogbonnaya Onu is not quitting active politics yet because he still has a lot to contribute to our politics.

“We, his associates, have our misgivings against the party and I am sure he knows about our misgivings, but our major problem is that the national leadership of the parties has refused to do anything about it. But despite the attitude of the party, we will not abandon the party we formed for people who just joined.”

He stated that the group was organizing a one-million march for APC and Tinubu in the South East, adding that the former Minister, his political associates, his loyalists and other party faithful would be part of the march.

‘Nwajiuba Working With Uzodimma To Rebrand Party In Imo’

In the case of Nwajiuba, an APC stalwart and close associate of the former minister of state for Education, Hon. Chukwudi Odu, said Nwajiuba had no intention of leaving the party.

According to him, the former minister is working in close collaboration with the Governor of Imo State, Hope Uzodimma, with the intention to capture Southeast for the party.

According to him, since he left office as a minister, Nwajiuba has been participating in political activities in the state and is highly respected as an APC stalwart and confidant of the governor.

“Nwajiuba, when in office, visits the state intermittently, however, the scenario has changed as the former minister is always in the state attending political meetings. ”

He cited the just concluded stakeholders meeting held in the state and submitted that Nwajiuba participated actively and made useful contributions.

“Hon. Nwajiuba was in the state over the weekend attending the All Progressives Congress (APC), stakeholders conference.”

According to him, Nwajiuba is a serious party man and has no intention to dump the party. According to him, over the weekend, they deliberated on a way forward and strategy on how to emerge victorious in the 2023 presidential election.

Hon. Odu explained that the former minister is a consistent and reliable party man and assured that since after the presidential primary, the Ehime Mbano born politician is collaborating with the Imo State governor, Hope Uzodimma, so as to deliver APC candidates come 2023.

Akpabio Out Of The Country, Says Aide

Speaking with LEADERSHIP yesterday, Mr. Jackson Udom, the Chief Press Secretary (CPS) the immediate past Minister of Niger Delta Affairs, Chief Godswill Akpabio, as mere speculation that he has been out of public glare.

“Senator Godswill Akpabio is very busy, and had been out of the country in the last three weeks.

“Before he travelled, he had attended the unveiling of the APC presidential running mate, Kashim Shettima. He also attended the wedding of Shettima’s daughter, so the notion that he has not been visible is all wrong”, he explained.