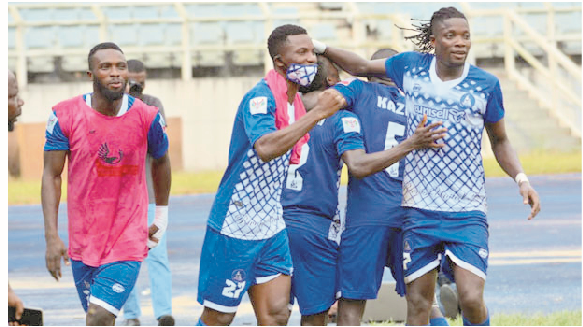 Rivers United took a giant lift towards clich the Nigeria Professional Football League title for the 2021/22 season yesterday with a 2-1 victory over visiting Abia Warriors at the Adokiye Amiesimaka Stadium, Port Harcourt.

The victory gave Stanley Eguma’s side a 10-point lead at the top of the NPFL log following a 2-1 defeat of second-placed Plateau United to Shooting Sports Stars Club (3SC) of Ibadan.

Abia Warriors surprisely silenced the host fans at the Adokiye Amiesimaka Stadium by taking the lead in the opening minute of the encounter through Anthony Okemiri.

But the Pride of Rivers rallied back with Chijoke Akuneto scoring a brace in the second half to take a giant lift toward their first ever NPFL title since the formation of the club in 2016 following the merger of Sharks F.C. and Dolphins F.C.

Meanwhile, Plateau United failed to sustain pressure on the league leader following a 2-1 defeat to 3SC at the Lekan Salami Stadium, Adamasingba, Ibadan.

Malomo Taofeek put 3SC ahead on eight minutes, while Samuel Mathias equalised for the visitors in the 64th minute before Moses Omodumueke netted the winner from the penalty spot for the hosts.

Elsewhere, Enyimba of Aba thrashed Kwara United of Ilorin 3-0 in Aba, holders Akwa United boosted their chances of securing continental ticket with a 1-0 home win over Remo Stars in Uyo, Nasarawa United pipped Enugu Rangers 1-0 in Lafia, while Kano Pillars and Wikki Tourists played out a 1-1 draw in Kano.