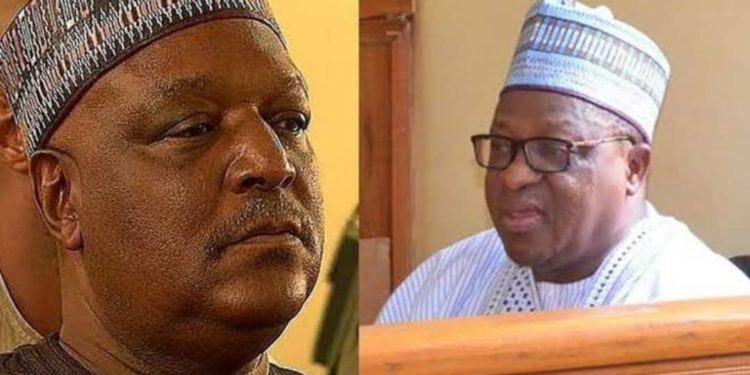 Stringent pardon conditions and the delay by the Attorney-General of the Federation and Minister of Justice, Abubakar Malami, SAN, to forward documents regarding the state pardon granted former governors of Plateau and Taraba States, Senator Joshua Dariye and Jolly Nyame, respectively, to the authorities of the Nigerian Correctional Service (NCoS) in order to perfect the process for their release, has been blamed for their continuous stay in Kuje custodial facility.

Weeks after their pardon by the National Council of State, the duo of Nyame and Dariye, are still cooling their feet at the Kuje correctional facility in Abuja.

When contacted, the image maker of the Nigerian Correctional Service, Umar Abubakar, he explained that the inmates would remain in the facility until a correspondence from the Ministry of Justice directing their release was received.

According to Abubakar, “the truth is that for any suspect brought to our facility, we must be shown a warrant. The same goes for any inmate who has fully served his jail term or granted presidential pardon. Expect for the correspondence we are awaiting from the Ministry of Justice, we have no reason to keep them.

“We are just adhering to laid down procedure, nothing more. Once we get the said document, we will do the needful.”

Some legal experts have attributed the development to stringent pardon conditions, and therefore, called on the federal government to review the circumstances of each case in arriving at a pardon decision.

In the same vein, friends, families and business associates of the two former governors have expressed fear that the delay may not be unconnected with the public outcry, which greeted the pardon by Civil Society Organisations, among others.

They outrightly expressed concern over their continuous detention and how their matter is being handled.

Boko Haram: 200,000 Displaced People In North-East Yet To Be Repatriated – Zulum