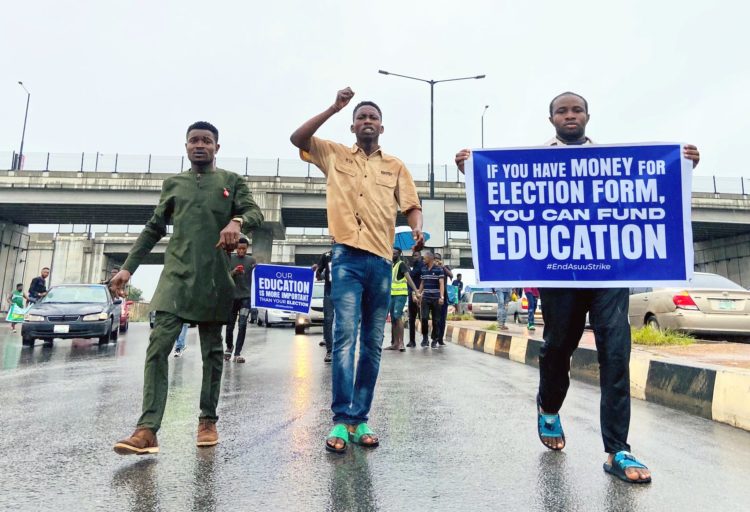 Local airline operators have complained of suffering losses in their operations after the National Association of Nigeria Students (NANS) blocked the road leading to the Murtala Muhammed International Airport (MMIA) yesterday to protest the seven-month-long strike that has crippled academic activities across universities nationwide.

Though scheduled flight operations went on at the airport, flights were delayed due to the blockage as airport and airlines staff trekked long distances to get to their officers.

LEADERSHIP gathered that though none of the airlines cancelled its flight, the students’ action impacted on them negatively as passengers were not able to access the airport while some flights were delayed.

Arik Air, in a notice to air passengers, explained that there may be disruption of flights due to the ongoing protest.

It read, “Please be informed that you may experience disruptions to your flights, especially out of Lagos, due to the protest by the National Association of Nigerian Students (NANS). The students this morning blocked the access roads to both the International and Domestic Terminals of the Murtala Muhammed Airport, Ikeja, Lagos.

“We are doing all within our capacity to mitigate the effects of the protest on our valued customers.”

LEADERSHIP gathered that the blockage lasted several hours as they chanted solidarity songs, insisting that they would continue until the strike is called off.

The students, who defied the heavy downpour, caused gridlock on the road leading to the airport, leaving many travellers stranded.

The students who were, however, blocked by security operatives from gaining access to the airport, took over the road, preventing traffic flow both inward and outward from the facility.

“We have taken over the road already despite the rainfall; they mobilised lots of security operatives to tame us but nothing shall shake us until our students return to classes,” NANS Zone D coordinator, Olatunji, told reporters.

Meanwhile, the National Industrial Court has again fixed September 21, 2022 to rule on the application for an interlocutory injunction filed by the Federal Government against the Academic Staff Union of Universities (ASUU).

Justice Peter Hamman fixed the date yesterday after the lead counsel to the federal government, Mr James Igwe, argued his application which seeks an order of the court to restrain ASUU from further continuing with the ongoing nationwide strike.

The government had approached the court to challenge the ongoing industrial action by the university lecturers.

But the court, at the previous sitting last Friday, adjourned the suit until Monday (September 19) to hear the interlocutory injunction of the government.

The government application is seeking an order to restrain ASUU from continuing with its ongoing strike “pending the hearing and determination of substantive suit.”

Igwe had asked the court to give the suit accelerated hearing due to the urgency of the matter to enable students return to school.

He stated that since the matter was already in court, it would be proper for the strike to be called off pending the determination of the suit.

But counsel to ASUU and Senior Advocate of Nigeria, Mr Femi Falana, said the union was currently meeting with stakeholders to ensure that the matter was resolved and appealed to the government to cooperate with the union to resolve the issue.

ASUU embarked on an initial four weeks strike on 14 February, demanding the government to honour the agreements it had entered with the union.

After several meetings without resolution, ASUU continued to extend its strike by certain periods until 29 August when it extended the strike indefinitely.

In a related matter, the Speaker of the House of Representatives, Femi Gbajabiamila, is scheduled to hold a meeting with critical stakeholders towards finding a lasting solution to the lingering strike embarked upon by ASUU.

The meeting which is scheduled to hold today at the speaker’s conference room is expected to have in attendance the representative of the union and the federal government as well as other relevant stakeholders.

According to the letter of invitation addressed to the Federal Ministry of Education, dated 15th September, the ministry is required to submit a written presentation of ASUU’s perspective on this matter to the House before the meeting day.  The letter was shared by the Clerk of the House, Yahaya Danzaria.

The letter further reads, “The House of Representatives is deeply concerned about the   renewed strike which seems to have defied all efforts made to find a solution or reach agreement between the federal government and the striking university lecturers.

“The House is more worried about the negative consequences of the strike on the future and quality of education of our teeming youths who have been kept at home for the past six months despite the intervention of the House and several well-meaning Nigerians overtime to see that the matter was resolved.

“In the light of the foregoing, the House hereby requests for another opportunity to come together with stakeholders and leadership of ASUU to seek an amicable resolution without prejudice to the fact that the matter is already in the Industrial Court.”