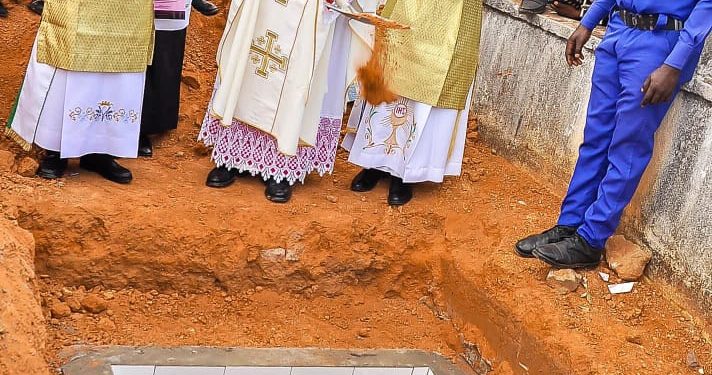 Family, friends and well wishers wept profusely on Thursday as Catholic Archdiocese of Kaduna buried Rev. Fr. Vitus Vaishima Borogo, who was  killed by terrorists on his farm in Kaduna State.

Late Bogoro was killed on June 25, 2022 while his brother, C.Y. Borogo, was kidnapped by the attackers.

The Priests of the Kaduna Archdiocese led a peaceful protest after the funeral mass of the slain priest with some of them carrying placards with inscriptions like; ‘We Are Priest and Not Terrorists’, ‘Government Should Secure Nigerians’, ‘Anyone Who Killed Lost His/Her Right To Life’, ‘Justice Must Be Served’, ‘Do We Still Have A Government?’, and many others.

Speaking at the funeral, the Catholic Archbishop of Kaduna, Most Rev Matthew Man-Oso Ndagoso, disclosed that Nigerians are prisoners in their own country because of persistent attacks and killings.

He added that Nigerians were traumatised and at the stage of losing hope, lamenting that some Nigerians have no reason to live again because of the way things are going on in the country.

“I feel devastated, it is so painful that within one year I have buried three priests who died in the hands of these bandits. The most painful one was late Fr. Aketeh whose burial took place last three weeks without his corpse.

“We no longer have tears in our eyes because the source of our tears have dried up because of constant crying. We have also lost our voices because when you talk nobody listens, you cry nobody hears your cry, but we will not lose hope, one day God will wipe our tears,” he said.

He further said, “any politician who cannot secure Nigerians should not contest for any political position. It is better the person withdraw from the race.”

On his part, the vice chairman of the Indigenous Priests of Kaduna, Rev. Fr. Joseph Gandu, called on the government to secure lives and property of Nigerians, maintaining that it is the government’s social responsibility.

He noted that nobody has any right to kill another person, adding that human beings are major assets of the country before any other asset.