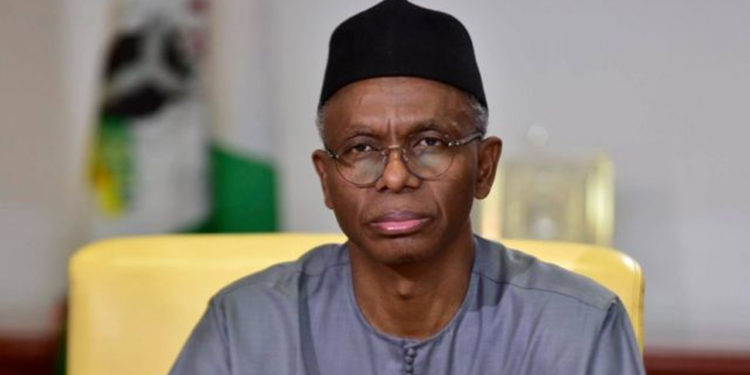 Kaduna State governor Nasir El-Rufai has revealed the extent of terrorists’ entrenchment in his state, saying they have managed to set up their own government structures and are exercising control over some areas of the state.

This was revealed in the governor’s leaked memo to the president which warns of the terrorists’ advanced plans to create a permanent operational base for the North-west region.

El-Rufai told President Muhammadu Buhari that terrorists were consolidating their grip on communities in Kaduna with a “parallel” government and “permanent operational base” in the North-western state near Nigeria’s capital, Abuja.

El-Rufai warned the president of the terrorists’ consolidation in a late July memo sighted by the online media outfit, Premium Times.

The terrorists belonging to Ansaru al-Musulmina fi Bilad al-Sudan, or Ansaru for short, are believed to have moved to Birnin Gwari in Kaduna State in 2012 when they broke away from Boko Haram.

According to intelligence reports and human sources consulted in further reporting for this story, the terrorists that formed Ansaru were responsible for some of the high-profile attacks claimed by Boko Haram before the split.

Such attacks included the UN building bombing of August 2011 and the kidnap of some foreigners. According to the sources, Ansaru pledged allegiance to Al-Qaeda in the Islamic Maghreb, AQIM, in 2020, and is responsible for many of the high-profile abductions as well as armed attacks on the police in Kaduna State.

But it was learned that a collaboration of the terror groups, including the original Boko Haram – also called JAS -, ISWAP, Ansaru, and bandits was evolving.

In El-Rufai’s late July memo, he lay bare how the terrorists had infiltrated and dominated communities and formed “a parallel governing authority,” exercising control over social and economic activities and dispensation of justice in the area.

He said the terrorists had advanced in their plans to make Kaduna Forest areas their “permanent operational base” for the North-west region.”

“Observed movement patterns and intercepted communications of migrating terrorists have shown a clear interest in setting up a base, with the stretches of forest area between Kaduna and Niger states strongly considered,” he wrote.

President Muhammadu Buhari yesterday in Abuja said he was not going to deploy lethal military force as part of efforts to rescue the Kaduna train attack hostages due to the collateral damage it can cause.

The president made this comment when he met with representatives of victims of Kaduna train abduction, even as he assured them that the federal government was doing everything within its powers to ensure the safe return of the remaining captives.

Condoling with the families of the victims and those who lost their loved ones, the president, in a statement by presidential spokesman, Femi Adesina, said since the “terrible and cowardly attack by the criminal elements” on March 28, 2022, the nation had joined them to endure a period of difficulty and emotional pains.

The president told representatives of the families that in the immediate aftermath of the incident several actions were taken by the government to bring succour to the affected families and to prevent a recurrence in the country.

He also explained his reason for discarding the use of lethal military force in extracting the remaining abductees.

“I have been informed that, at the last count, there remains about 31 people in the hands of the kidnappers, and our determination is to work towards returning these 31 people to their families.

‘‘It is understandable that emotions typically run high. We have received several suggestions about the deployment of lethal military force in extracting those still being held in captivity. This option has indeed been considered and evaluated.

‘‘However, the condition to guarantee a successful outcome and minimize potential collateral damage could not be assured and therefore that course of action had to be reluctantly discarded.

”My primary concern is to get everyone released safe and unhurt,’’ he said.

On his recent instruction to security and law enforcement agencies to bring an end to cruel actions against innocent Nigerians, the President expressed delight, saying that judging by the available reports emerging in the last few days, his instruction was being obeyed.

The president said: ‘‘In the past couple of days, you must have heard about the number of terrorists neutralised by the military, and number of hostages freed. These efforts will not stop, or reduce.

‘‘We must take the fight to the terrorists and demonstrate that there is no hiding place for them within the borders of our country. Each one of them will be hunted, and pursued and spoken to in the language that they understand.’’

The president also used the occasion to commend the bravery and gallant actions taken by members of the Police Force who were onboard the train on that fateful day.

According to the President, ‘‘It is clear that their actions saved many lives and by making the ultimate sacrifice, they must be recognized for their bravery.’’

Buhari added that he had never doubted the ability or confidence of those who have presented themselves to defend the country, and that the Kaduna train incident had reinforced the belief and faith of the nation in this special group of Nigerians.

‘‘I also would like to use this opportunity to say that we are cognisant of events that have unsettled our citizens in various parts of our nation and in the capital.

‘‘I would like to comfort those who were traumatised by these tragic events and pledge that our response is to protect all Nigerians wherever they are.

‘‘My dear country men and women, we thank God that none of the released prisoners died due to the severe trauma they passed through in the hands of the terrorists, showing that the efforts of government in securing their release were not in vain as government continues to do its best to secure the release of the remaining abductees and ensure the overall security of all citizens in the country,’’ he said.

In his remarks, the minister of transportation, Jaji Sambo, said in the first week of his resumption at the ministry, he met with the relatives of the victims of the Kaduna train attack, updating them of all the efforts the government was making to ensure the safe return of their loved ones.

He described the audience with the president as a manifestation of the efforts by this administration to secure the release of all captives, and proof that ‘‘government is not resting on its oars.’’

A representative of the victims of the train abduction, Alhaji Sabiu Mohammed, appealed to the federal government to assist in releasing the remaining captives.

Meanwhile, the attorney-general of the federation and minister of justice, Abubakar Malami said the federal government has secured the conviction of 1,000 terrorists to various terms of imprisonment in the last 18 months.

He further stated that the President Muhammadu Buhari-led administration also secured the conviction of 312 other criminals within the same period.

The minister, who spoke at the presidential villa yesterday, declared that “the ministry has so far secured over 1,000 convictions on terrorism. Convictions have also been secured in 45 cases by the Complex Casework Group, Maritime unit, and the special task force on electricity offences and across the 13 zonal offices of the ministry.”

He said his ministry was coordinating the next phase of terrorism-related trials in collaboration with the federal high court, the Legal Aid Council, and the Defence Headquarters.

The director, Defence Information, Major General Jimmy Akpor, in a statement said the suspects, Al-Qasim Idris and Abdulhaleem Idris, were arrested on August 9, 2022 in Ondo State.

This brings to six the number of suspects arrested in connection with the church attack where over 40 worshipers were killed in the hometown of Governor Akeredolu.

According to the statement, “They were arrested through a combined operation by military and DSS personnel at Eika, Okehi LGA, Kogi State on 1 August 2022.

“Barely few hours after the disclosure by the CDS of the arrest of four of the Owo Catholic Church attackers, two additional ISWAP terrorists, who were also connected to the attack on the church, were apprehended at Omialafara (Omulafa), Ose LGA, Ondo State on August 9, 2022.

“The arrests were made through the collaborative effort by military and DSS personnel. The suspects are Al-Qasim Idris and Abdulhaleem Idris. It is instructive to note that Abdulhaleem, alongside other high profile ISWAP commanders, had also previously coordinated attacks on military targets in Okene, Okene LGA, Kogi State resulting in casualties.”

Gen Akpor added that the leadership of the military, Nigeria Police, DSS and other security agencies were committed to working in synergy to enthrone peace and security all over the country.

Similarly, Defence Headquarters (DHQ) has announced that 1,755 terrorists have surrendered, with troops killing 29 terrorists, arresting 55 and rescuing 52 civilians in the Northeast.

In the breakdown, he said troops of Operation HADIN KAI  ambushed Boko Haram/ISWAP terrorists along Road Uzoro-Gadamayo in Adamawa State.

He said during the encounter, one terrorist was neutralized while others fled.

Items recovered from the suspects include the sum of N1,793,700.00, large quantity of assorted food stuffs, three handsets, two bicycles and other sundries.

In a similar vein, the air component of Operation Hadin Kai conducted air strikes on 3 August 2022 at Degbawa near Mandara Mountains in Gwoza local government area of Borno State.

He said the airstrikes led to the neutralisation of a key ISWAP commander, Alhaji Modu (a.k.a. Bem Bem) and 20 of his fighters.

“Consequently, within the week under review a total of 1,755 Boko Haram Terrorists members and their families comprising of 280 adult males, 523 adult females and 952 children surrendered to own troops at different location” he said.

He said the troops also arrested one Mallam Yahaya, a notorious bandit informant who has been on the tracking list of the Department of State Security for collaborating with bandits on the numerous attacks in Sabon Brini general area of Sokoto State.

Items recovered include, 161 cattle, eight camels, large consignment of clothing from terrorists after an encounter in Zango in Shinkafi local government area.

In another development, he said the Air Component of Operation HADARIN DAJI carried out successful strikes on key terrorists enclave and hideout located at Rudu forest in Katsina State and killed high profiled terrorist leader who has been on the wanted list of the military named Alhaji Abdulkareem Lawal (aka Abdulkareem Boss and 27 of his foot soldiers.

In the North Central, troops of Operation WHIRL STROKE arrested notorious criminals on the wanted list of the Theatre Command namely; Nathaniel Azege who has been terrorizing Makurdi town.

Items recovered during the operation include one AK47 rifle, one locally made pistol, nine rounds of 7.62mm NATO, five mobile phones, one axe, two machetes among others.

He said the arrested kidnappers confessed to have been involved in a number of kidnapping incidents in Fuskar Mata village and Qua’anpan town.

Items recovered from the suspects include one AK47 and 10 rounds of 7.62mm special.

He also said that on 8 August 2022, based on credible intelligence on the massing up of terrorists loyal to a notorious terrorist, Alhaji Shanono, at Ukambo village, the Air Force carried out airstrikes killing Shanono and 17 other terrorists.

“Report from locals disclosed that 30 AK47 rifles and 20 motorcycles were destroyed while 18 terrorists were neutralized. Sources also revealed that 45 kidnapped civilians were released as a result of the airstrike,” he said.

In another operation, troops of Operation Delta Safe recovered 3,750,000) litres of crude oil and 2,019,000 litres of Automotive Gas Oil in addition to arresting 10 suspected pipeline vandals.