The endless battle between Imo State governor, Hope Uzodimma, and his predecessor, Senator Rochas Okorocha for the soul of All Progressives Congress (APC) in the state rages, EMMANUEL MGBEAHURIKE, writes.

by Emmanuel Mgheahurike
in Feature, Politics
0 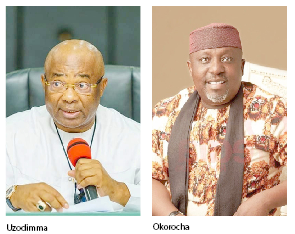 In spite of two Supreme Court judgments on All Progressives Congress (APC) leadership in Imo State, peace has remained elusive for the party. The two major factions and contenders entangled in the squabble are still laying claim to the state party executive.

While the Hon Daniel Nwafor led-exco is loyal to the former governor of the state, Senator Rochas Okorocha, the incumbent governor, Hope Uzodimma installed the MacDonald Ebere led exco.

In 2019, when the Nwafor-led executive was dissolved to give way for a caretaker committee under Prince Marcon Nlemigbo, the rumpus in the party has far from abated.

LEADERSHIP discovered that even when it was assumed that the recent Supreme Court Judgments had put the matter to rest, a fresh crisis emerged as the state exco led by Dr. MacDonald Ebere and that of Nwafor, laid claim to the leadership in the state based on the judgment.

After challenging his sack at the appellate court and going ahead to win the cases at the Appeal Court before that of the Supreme Court, which was decided on May 27, 2022, the Nwafor group insisted that they are now in charge of the party in the state.

They added that the actions of the Ebere team are illegal, null, void and of no effect.

However, to counter the May 27, 2022 Apex Court ruling which restored the Nwafor-led camp, the Ebere-led executive relied on the latest judgment of the same Supreme Court to remain in office.

The Ebere-led exco, in a statement confirming its continued stay in office, explained that the latest judgment, setting aside an earlier ruling by an Abuja High Court which recognised Nwafor, is a welcome development.

The statement signed by the publicity secretary of Ebere’s camp, Hon. Cajetan Duke said, “The All Progressives Congress, APC, Imo State has received with profound joy, the landmark judgment of the Supreme Court affirming the election of Dr. MacDonald Kelechi Ebere as the rightful chairman of the APC in Imo State.

“This followed the majority judgment of the apex court setting aside an earlier ruling by an Abuja High Court, which recognized Hon. Dan Nwafor as the chairman, an action which the national leadership of our party challenged up to the supreme court.”

The camp further recalled how the Nwafor team, through Evans Enwerem, challenged the dissolution of Imo APC executive committee from the ward to state levels in the run-up to the 2019 general election on account of gross abuse of office and anti-party activities.

However, in the Supreme Court judgment read by Justice Adamu Jauro on behalf of four other justices, it was held that the Federal Capital Territory (FCT) High Court, lacked jurisdiction to have heard the suit ab initio.

It further held that for the first respondent to have left Imo State, where the events in dispute occurred and rushed to Abuja to file the suit amounted to forum shopping and a gross abuse of court processes.

The Supreme Court therefore struck out the appeal and the suit together with the processes filed right from the trial court.

However, the Ebere camp said, “Beyond the participation of Imo delegates at the just concluded national convention led by Hon Macdonald Ebere as the only recognised state chairman, this judgment has finally sealed and laid to rest the question of the authentic chairman of the APC in the state.“

While dismissing the position of the  Ebere led exco insisting on being the authentic exco, the Nwafor faction insisted that it remains the recognised exco, noting that the opposing camp’s claim is “extreme falsehood.”

According to the acting publicity secretary of the Nwafor-led faction, Micheal Anyanwu, the Supreme Court has only affirmed and recognised Nwafor and his state executive committee as lawful and duly elected whose tenure still subsists till July 31, 2022 and never stated anything to the contrary.

The Nwafor faction warned the Ebere camp to desist from making a mockery of the Supreme Court and subjecting the APC to public ridicule as well as insulting the sensibilities of the people.

In its reaction to the Supreme Court judgment which Ebere exco is laying claim to, Nwafor’s camp submitted that “The information, to say the least, is not only criminal, untrue and embarrassing but has proven strongly that Dr. Macdonald Ebere, his shameless sponsors and their co-travellers are hellbent on making mockery of the country’s Apex Court while also subjecting our great party, APC, to public ridicule.

“The charade and blatant falsehood by this notorious group must stop forthwith as it is insulting the sensibilities of Imo people and the general public all at once.”

This faction further gave its interpretation of the apex court judgment, thus: “It would be recalled that on the 27th of May, 2022, the apex Court in Nigeria delivered a landmark judgment affirming Hon. Daniel Nwafor-led state executive Committee as the authentic, lawful, duly elected, properly constituted and legally recognised executive and leadership of the party in Imo state.

“The judgment was greeted with a wide ovation across Imo state and beyond, not only because of its popular acknowledgment to be in uncompromising defense of the nation’s democracy, rule of law and justice system but for the fact that it also laid to perpetual rest the legal tussle of leadership in the Imo state chapter of the All Progressives Congress.”

However the friction came to the fore recently following the circulation of two different letters recognising two people as state chairman.

One of the letters dated June 15 and signed by APC national secretary, Sen Iyiola Omisore directed that the Nwafor led executive be reinstated as directed by the Supreme court.

But another letter, dated June 28 and signed by the South East national vice chairman, Dr Ijeoma Arodiogbu, directed Ebere to totally disregard the letter of reinstatement of Nwafor led executives.

Part of Omisore letter read “I write to convey the decision of the party to comply with the supreme court judgment on the case between APC vs Evans Enwerem and two others (SC/CV/884/2020) which ordered for the reinstatement of Daniel Nwafor led executives in Imo State.

“You are by this development directed to take possession of the party Secretariat and as well take charge of all party activities in the state as the Chairman until the expiration of your tenure on 31st July 2022”.

However, the South East vice chairman, Dr Arodiogbu discounted the first letter, saying no such matter was discussed at the National Working Committee meeting to warrant the purported directive.

Part of his letter read “That in this instance no such notice was brought to the attention of the NWC. It is hence believed that Chief Omisore would not deliberately dare to disregard such an important provision in the constitution of our great party. And if he did, he did so of his own accord.

“The judgment so cited in the referred mischievous letter was not a conclusive judgment. Moreso, the supreme court did not give any directives for its enforcement. And you were not a party to the suit.”

However the Dr Macdonald Ebere led executive is in charge of the party secretariat even as their publicity secretary, Cajethan Duke has dared Nwafor to come to the party office to assume office.

In a statement, he maintained that “It is important to state that there was nothing in the majority judgement delivered by the Supreme Court on Friday,  May 27  2022 in the case between APC vs Evans Enwerem & 2 others SC/CV/884/2020 that confers any recognition and legitimacy on Dan Nwafor and his co-travellers. The judgement remains unambiguous and clear.”

For now, the APC in Imo is beset with  uncertainty, no thanks to the unabated squabbles between the Governor, Hope Uzodimma and Senator Rochas Okorocha.