by Ray Morphy
in Backpage, Opinion
0 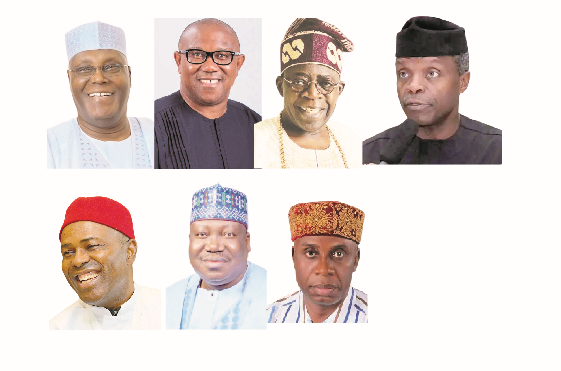 In his seminal book, The Trouble with Nigeria, late Father of African Literature, Professor Chinua Achebe, poignantly noted that the trouble with Nigeria is leadership failure. According to him, “There is basically nothing wrong with the Nigerian land or climate or water or air, or anything else”.

The trouble with Nigeria, Achebe posited, is “simply and squarely failure of leadership”.

Nigeria is presently on the verge of electing new set of leaders.

Interestingly, some of those presenting themselves for leadership are among those who put this country in its present situation by their unpatriotic actions and inactions.

It is important to remind these vote seekers, some of the challenges that need urgent attention.

While Nigeria is no longer the poverty capital of the world it still has over 70 million people living in extreme poverty, the highest in Africa. The World Poverty Clock (WPC), an online tool that provides real-time poverty data across countries, showed that 83 million Indians now live below the U.N. estimated poverty line of $2 in 2022.

In 2018, Nigeria surpassed India as the world’s poverty capital, with around 87 million people living in extreme poverty, compared with India’s 73 million.

However, according to the WPC, the latest statistics of Nigerians living in extreme poverty was pegged at (70,677, 758) representing 33 per cent of the population. The real-time poverty data tool showed that 53 per cent of Nigerians currently living below the U.N. estimated poverty line are residents in the rural areas. In Africa, Nigeria leads the pack as the country with the highest number of people living below the poverty line followed by the Democratic Republic of Congo which has an estimated 67 million poor citizens. In third place is Madagascar with over 21 million poor citizens, followed by Angola with around 18 million poor citizens.

Other indices of development also show that the country is lagging behind in several sectors. Nigeria is still far from the recommendations of the World Health Organization (WHO) on the required number of medical personnel to cater efficiently for its teeming population as the federal government disclosed that doctor to patient ratio is 1: 2753 which translates to 36.6 medical doctors per 100,000 persons. Shakuri Kadiri, Deputy Director, Head of Human Resources for Health, Federal Ministry of Health, disclosed this at the launch of the Nigeria Health Workforce Country profile -2018 and handing over of the National Health Workforce Registry in Abuja. WHO recommends 1:600 doctor-patient ratio.

He further informed that in 2018, 24,668 pharmacists were registered with the Pharmacists Council of Nigeria (PCN) and this equates to 12 pharmacists per 100,000 members of the population with a pharmacist to population ratio of 1:8,317. Nigeria is endowed with large oil, gas, hydro and solar resources, and it has the potential to generate 12,522 MW of electric power from existing plants. On most days, however, it is only able to dispatch around 4,000 MW, which is insufficient for a country of over 200 million people. According to the Ministry of Mineral Resources and Energy, South Africa’s total domestic electricity generation capacity is 58,095 megawatts (MW) from all sources for a country of 59million population. There is a lot that Nigerian leaders need to learn from South Africa and elsewhere on improving power generation and distribution, since Nigeria’s economic development depends largely on power.

In the education sector, the National Policy on Education stipulates that the teacher-pupil ratio should be 1:40. However, the ratio is exceeded in most schools, especially in urban areas. The Institute for Statistics (UIS) is the official statistics agency for the United Nations Educational, Scientific and Cultural Organization (UNESCO).

Its most recent data showed there were about 58 pupils to every qualified teacher in 2013.

“There is no recent published data for Nigeria for pupil-teacher

ratios because the country didn’t recently submit the necessary data to calculate these indicators,” Bertrand Tchatchoua, an adviser at the UIS, told Africa Check. Comfort Edemenang, a professor of educational administration and planning at the Abubakar Tafawa Balewa University in Bauchi in northeastern Nigeria told Africa Check that in some public primary schools in the north, a teacher was handling more than 100 pupils, sometimes up to 150.

“But this is not the case in private schools where you would normally find between 35 and 40 pupils in a class,” Edemenang said. “But generally, when you have such situations where a teacher is faced with over 100 pupils, the quality of education is eroded.”

The basic education commission’s data for 2018 shows ratios of more than 80 pupils to one teacher in some geopolitical zones in the country.

In the area of security, the Nigeria Police Force is the principal law enforcement and the lead security agency in Nigeria. Designated by the 1999 constitution as the national police of Nigeria with exclusive jurisdiction throughout the country. As at 2016 it has a staff strength of about 371,800. The Nigeria Police Force is a very large organisation consisting of 36 State commands and Federal Capital Territory (FCT) grouped into 17 zones and 8 administrative organs.

This number of police many have observed is not enough to police adequately Nigeria that has a total area of 923,770 km² and a total coastline of 853 km. Nigeria is one of the largest countries in Africa and the 32nd biggest in the world, yet it has less than 400,000 police personnel to man her vast landmass. Little wonder that the police appear overwhelmed by the growing insecurity in the country. This has led to the military getting involved in tackling security issues that ordinarily should be left for the police. Even the military has also become overstretched, as their interventions have not totally restored peace to parts of the country ravaged by terrorism and banditry.

Nigerian Navy, and Nigerian Air Force have been fighting the Boko Haram and bandits to no avail. It has also been noted that even the military does not have enough booths on the ground, which made it easy for violent non-state actors to take over several ungoverned areas in the country where they kill, maim and destroy properties at will. With a force of more than 223,000 active personnel, the Nigerian military is one of the largest uniformed combat services in Africa. According to Global Firepower, the Nigerian Armed Forces are the fourth-most powerful military in Africa, and ranked 35th on its list internationally, yet it had not been able to overwhelm ragtag Boko Haram and bandits. That is the jigsaw that Nigerian leaders must unravel if we are to have peace and security. The incoming set of leaders must purge themselves of indolence, if they aim to find solutions to the aforementioned challenges that will lead to the process of rebuilding this country.