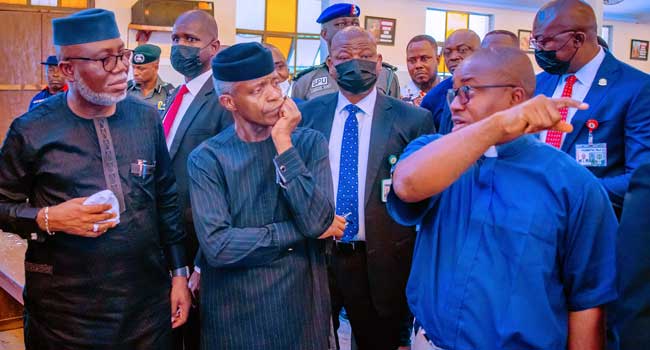 Osinbajo who visited the town, said he came on behalf of President Muhammadu Buhari as well as the federal government to express their sincere condolence first to the church and then to the people of Ondo State.

According to the vice president, “I do not think that anyone will wish even their worst adversaries. It is also a time to reflect deeply on the questions of our relationship to each other, I think that is one of the things that has happened here. Everybody has condemned it.”

Osinbajo further stated that “One is almost completely speechless because looking at the extent of tragedy that took place here on Sunday, the evil is almost unspeakable.”

His words, “It is a horrible thing indeed. That people will gather on a Sunday morning for worship and then be confronted by this sort of heinous and barbaric murder. I think it is just terrible. This is a horrible tragedy.

“It is a sore in the heart of every Nigerian. Those who perpetrated this does not represent us in any way. These are animals who have behaved in a manner that should ordinarily shock even the most depraved of human beings.

“All of us who are here are being encouraged by the courage the priesthood here and the members of the congregation have shown as well as this community.

“They are the ones who define us, their attitude of peace and calm and approaching this with fortitude and calmness.

“I truly think that they are the ones who represents who we are as Nigerians. As you know the president has already ordered a full investigation of this crime. I assure that those who perpetrated this will be fished out.”