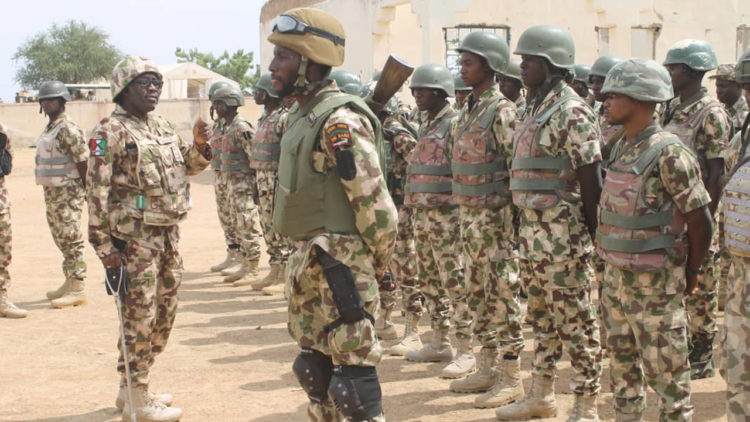 The Defence Headquarters (DHQ) has said troops operating in the North-East and North-West parts of the country, have killed 38 terrorists, arrested 40 and rescued 252 captives within two weeks.

The Director, Defence Media Operations, Major Benard Onyeuko, who disclosed this in Abuja during the biweekly update on Armed Forces of Nigeria operations between May 19 – June 2, 2022, said the troops recovered cache of arms and ammunitions.

In the North-East, he said troops of Operation Hadin Kai cleared several terrorists and recovered 40 sheeps, dumped truck vehicle and inflicted heavy casualties on the terrorists.

In the North-West, troops of operation Hadarin Daji sustained aggressive and clearance operations to deny terrorists and other criminal elements further freedom of action.

He noted that on May 22, 2022, troops following credible information about terrorists heading towards Dampo village in Bakura local government area of Zamfara State, mobilised and laid in wait at bandits’ crossing point.

He said the troops engaged the bandits in a gun battle and recovered 292 cattle and one camel.

General Onyeuko added that troops, following credible intelligence on May 21, 2022, arrested a notorious foreigner, Jabe Buba, who was a terrorist informant at Garuwa village in Tambuwa local government area of Sokoto State.

“Pictures and video of him posting rifles in the forest were found in phone and N130,000.00 was recovered from him.

Relatedly, he said troops in Operations OCTOPUS GRIP sustained pressure on economic saboteurs leading to the arrest of 21 suspects.

He said all recovered items and apprehended criminals were handed over to the appropriate authorities for further action.

Furthermore, troops of Operation WHIRL STROKE on 24 May 2022 responded to a distress call on kidnapping incident along Road Zakibiam-Ugba, killing killing three in gun duel.

He said “after a gun battle, the leader of the group one Mr Odada and two other kidnappers who were all dressed in military uniform were neutralized.

He said the victim one Mr Chimaobi Omemma a businessman was rescued, and the troops recovered; one AK 47 rifle, three fully loaded magazines (90 rounds of 7.62mm special), one Toyota Corolla vehicle and an ATM card bearing Felix Terzengwe.

Similarly, on 29 May 2022 troops following a distress call of a bandit terrorizing locals at Bowa in Doma Local Government Area of Nassarawa State areested one Mr Adamu Akure was at Ijiwo junction in Rukubu and recovered one locally made pistol, several cartridge amongst others.

He said the arrested criminal was presently under interrogations.

He added that the troops also arrested  notorious gun runner,one Mr Morris Ayitu after a raid at his residence in Abirisi in Guma local government area alongside his wife and an accomplice, Mr Julius Aseni.