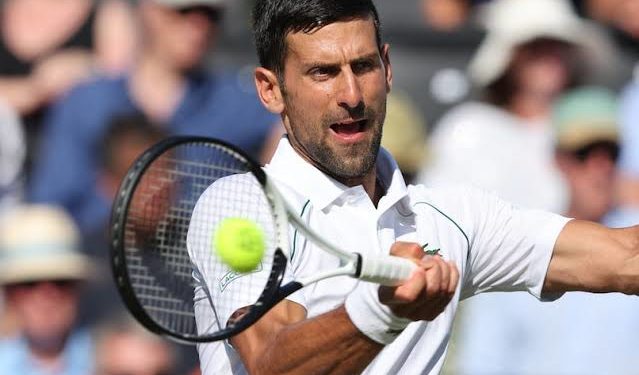 Defending champion Novak Djokovic reached the Wimbledon third round for the 16th time on Wednesday as potential semifinal opponent Casper Ruud crashed out.

“I’m very happy with my performance. I started very well, solid from the back of the court,” said Djokovic, who is looking to join Pete Sampras as a seven-time Wimbledon champion.

“I made him work for every point and worked him around the court,” added the 20-time major winner.

Kokkinakis had likened Djokovic to a “brick wall” before the match.

“It was one-way traffic. I got chopped today,” said the 26-year-old Australian after his Centre Court torment.

In the women’s event, second seed Anett Kontaveit lost 6-4, 6-0 to Germany’s Julie Niemeier as the Estonian endured another Grand Slam to forget.

Kontaveit has made the quarterfinals of a major just once in 29 attempts.

Lesia Tsurenko came out on top in three sets over Ukrainian compatriot Anhelina Kalinina to make the third round for the second time.

Tsurenko, ranked at 101, proudly wore a ribbon in the colours of Ukraine on her shirt.

“It was a big court. Two Ukrainian players but a lot of people were watching us. We felt amazing support,” said Tsurenko after her 3-6, 6-4, 6-3 win.

“Today on the way from hotel to the club, we got a driver,” she added. “She has taken two people from Ukraine into her house.

“I think it’s amazing when people help Ukrainians so much.”

Later on Wednesday, two-time champion Andy Murray puts his 8-0 record against John Isner on the line in their second-round clash.

Former No 1 Murray, now down at 52 in the world, needed four sets to defeat Australia’s James Duckworth on Monday.

At one point, the British star dropped in an underarm serve to carve out a winning point, much to the delight of the Centre Court crowd.

“I don’t know why some people find it disrespectful,” said Murray.

Despite his losing record against Murray, 37-year-old Isner has never played the Briton on grass.

He is confident he has the weapons at his disposal, having fired 54 aces to knock out qualifier Enzo Couacaud on Monday.