In this report, ABU NMODU writes on the effect of youth restiveness and insecurity challenges currently confronting residents in Niger State

by Abu Nmodu
in Feature
0 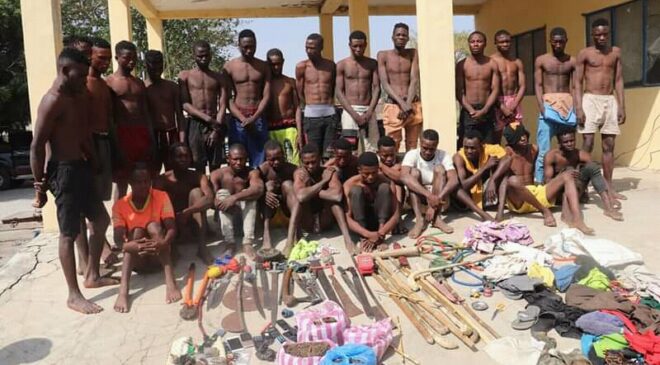 Aside from banditry, cattle rustling, and outright kidnapping, Niger State is grappling with the menace of youth restiveness, especially in the state capital, Minna.

The situation has posed serious security challenges in the state as the gangsters’ approach has proven to be difficult to curb.

While many youths have been killed and many arrested, the situation has continued unabated, even though the governor of the State, Alhaji Abubakar Sani Bello had spoken tough about the rising monster.

LEADERSHIP Weekend findings revealed a connection between drug abuse as a result of poor parental care and restiveness.

The restiveness started as mere youthful exuberance a few years back, but became very dangerous early this year.

On January 21 this year, clashes between youths from Limawa and Ogbomosho street in Minna led to the death of two people; a Policeman and a trader.

Also, LEADERSHIP Weekend gathered that the trader ran into the rampaging youths and was injured, although he was rushed to the hospital he eventually died.

Following the development, Niger State Police Command arrested 32 suspects in connection with the menace that led to the death of the policeman and trader.

When contacted, the Police Public Relations Officer (PPRO), Wasiu Abiodun disclosed that information was received that thugs popularly known as “Yan Sara Suka” of Ogbomosho and Limawa area of Minna were engaged in a fight at Lagos Street and Unguwar-Daji areas using machetes, sticks, stones and other dangerous weapons.
He said police patrol teams were immediately drafted to the area to forestall the breakdown of law and order, adding that the thugs were dispersed.
However, he said a shop owner at Ogbomosho road, Ifeanyi Patrick, aged 39 was stabbed to death as a result of the thuggery activities while a Police officer also lost his life in the process.
Also, 14 suspects, he said, were arrested at the scene and normalcy was restored while in a follow-up raid 18 other suspects were arrested at Limawa, Unguwar-Daji, Unguwar-Sarki, Abayi-close, and Kongila”.
He said the exhibits recovered from the suspects were two saw blades, two cutlasses, two scissors, one knife, two catapults, 12 handsets, two sticks, and a cash sum of N77,560.

The police spokesman, however, said all suspects are under investigation at the State Criminals Investigation Department (SCID) in Minna and will be arraigned in court as soon as the investigation is concluded.

Recent findings by LEADERSHIP Weekend revealed that the thuggery activities and attacks have become weekly affairs.
Between May and June this year, there were over 10 such clashes that turned bloody and caused businesses to close down.
During such clashes, the town usually stands still as no one wants to be a victim.

In June this year, the gangsters now nicknamed Sara Suka claimed the life of Muktar Bashir of Limawa in Minna Niger State after he was stabbed by opposing gang members.
LEADERSHIP Weekend gathered that in June again, some of the gangsters engaged themselves in a free for all fight around the Angwan-Daji and Limawa area of Minna almost every day, and during one of such clashes a young man identified as Bashir was stabbed and died at the spot.
It was also gathered that the corpse was taken to general hospital Minna for autopsy and later released to the family for burial.
The PPRO Abiodun confirmed that upon receipt of the information, the Department of Operations, Area Commander Metro, and other patrol teams in the metro were mobilised to the scene and two suspects were apprehended while others took to their heels.
A few days later, he added that a distress call was received of a suspected reprisal attack that some youths were engaging in a similar fight around stadium junction; Bosso road causing panic and blockage of the road.
“Police tactical teams immediately moved to the area and three other suspects were arrested including a notorious gang leader from Angwan-Daji by name Isah Aliyu aged 23 years also known as Gaye Obasanjo who stabbed the said late Muktar,” he added.
The PPRO gave the name of others arrested including; Ishaya Sunday aged 22 years from Bosso, Sani Ibrahim aged 24 years from Fadikpe, Aliyu Mohammed aged 24 years from Bosso, and Isah Abdulrahman aged 20 years from Sauka-Kahuta in Minna Metropolis, yet they were not deterred.
Residents of Lagos street, Anguwan Daji, stadium road, Limawa, Bosso road, and Maitimbi live in perpetual fear.
A resident of the area Shola James told LEADERSHIP weekend that they were made to close their shops and scamper for safety most of the time they clashed.
Asked what he thinks is responsible, he said “ the actions of the boys are typical of those abusing drugs and you obviously see that they lack parental care “
He told LEADERSHIP Weekend further that the clashes mostly begin like a joke until they will go out of control.
“And to be fair to the security agents, they are always careful knowing well that the boys were under the influence of drugs,” he said.
Another resident who pleaded to speak on the condition of anonymity said: “If you want to control those boys, you must first control the source of drugs and the politicians using them should also be used to control them”
LEADERSHIP Weekend gathered that the drugs mostly abused are a mixture of many things, this included cough syrup mostly tutolin, codeine mix sometimes with soft drinks, that they take without anyone suspecting.
Similarly, it was learnt that strong painkillers like tramadol, mixed sometimes with the solution used to patch burst tyres by vulcanizers were used depending on the gang they belong to, adding that some even do marijuana.
A 19-year-old repentant user who prefers to speak on the condition of anonymity said, “Sometimes if we don’t have money, we sniff dry lizard and human excreta to get high, even gutters and sometimes you least expect it.”
“The base is not organised we use uncompleted buildings, for marijuana, we stay in some excluded chamber to use other drugs because we know NDLEA and NAFDAC are after pharmacies and chemists on the drugs we use, we usually have customers who don’t display these drugs but could easily be accessed,” he said.
The Niger State government has over the week said that it will no longer tolerate the act of hooliganism perpetrated by youths in Minna and its environs.
The governor, who was represented by his deputy, Alh Ahmed Mohammed Ketso, made the position of government known at an enlarged strategic security meeting, held at Idris Legbo Kutigi International Conference Centre, Minna to fashion out modalities aimed at curbing youth restiveness.
He said the main responsibility of every government was to protect the lives and property of the people and cannot sit and watch while some miscreants disturb the peaceful atmosphere enjoyed in Minna metropolis.
The governor added that they have been patient and tolerant enough with the youths’ misbehaviours, warning that they should desist from it otherwise, anyone caught will be dealt with in accordance with the law.
He said the time of leniency was over and it was time to act, as the state government will empower the security agencies in the state to carry out their duty diligently and come hard on youths causing unrest in Minna and its environs.
Also joined in the fight was the Speaker of the State Assembly, Barr. Abdullahi Bawa Wuse, said the state legislative arm will make laws that will ensure adequate security in the state, adding that the state cannot be battling with banditry and kidnapping and also face youths restiveness in Minna metropolis.
The meeting had in attendance heads of security agencies, local government council chairmen, religious and traditional leaders, as well as the target youth groups, particularly youths from flashpoint areas of the state capital.