Amidst heavy criticism that trailed the call by Zamfara state governor, Bello Matawalle,  of on the citizenry to posses gun for self defense, former chairman of the Nigerian Bar Association (NBA),   Barrister Bello Galadi, in this exclusive interview with ADENIYI OLUGBEMI, applauds the establishment of community  protection guard.

by Adeniyi Olugbemi
in Feature
0 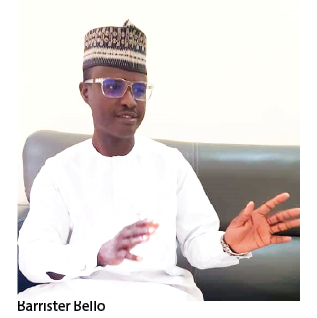 Kindly give a peep into your background?

What is the position of the law, in relation to the Zamfara state government policy on individuals to acquire guns to defend themselves?

The decision was taken in error and was not backed by any constitutional provision. Ordinary citizen in Zamfara state cannot afford a gun worth N1m.

Under the law, the highest caliber of guns the Commissioner of Police is empowered to issue license on are short guns otherwise known as double- barrel or pump- action. He cannot issue license to private individuals on AK- 47 or AK- 49 or Machine guns .Logically, how can a citizen with a short gun, who has no basic combat training confront a bandit with an AK- 47 or a Machine gun?

Critics of this new Zamfara security arrangement are of the opinion that allowing Nigerians to own guns will lead to state of anarchy and war. What is your take on this?

Zamfara people are mostly unlettered. Logically, how do you expect an illiterate to use the gun within the permissible ways only? It is suicidal for the government to proceed with this security arrangement. By the time there are four million guns in the hands of the four million population, the sovereignty of the state will be questioned.

Does a state governor have the prerogative to direct the Commissioner of Police to issue license to citizens to acquire guns?

By his nomenclature, the governor is the Chief Security Officer in the state. Sadly, he has no control over the Military, Police, DSS, NSCDC or any security outfit domiciled in the state. There is no line of hierarchy between the Governor and the Commissioner of Police. The Commissioner of Police receives instructions from the Inspector- General of Police, who receives orders from the President of the Federal Republic of Nigeria.

In fairness, the present administration in Zamfara state has deployed several tactics to checkmate incessant attacks across the state but, the monster seems to have defied all logic. Do you see the committees recently inaugurated by the state government doing the magic?

Sadly, the security situation in the state is deteriorating everyday. What the Governor has failed to do,is to identify the root causes of the problem and design strategic plans on how to address them. There should be free education up to degree level. Poverty should be reduced to the lowest level. Government should create jobs for the people. Give free drugs in the hospitals. There should be portable quality water in the urban and rural areas.

There should be good roads in our cities and villages. Address issue of corruption and fix our justice system. If the government can achieve this, within a short period of time, I assure you, Insha Allah, banditry in Zamfara State will become a thing of history.

On the recently inaugurated committees, I have reservations on the composition and leadership of the committees set up by the Governor. The committees have been politicized, as such, I am not expecting much from them.

When clamours for state police ended a stillbirth, state governors in the south -west region settled for Amotekun. In your opinion, would establishment of similar security outfit be of relevance in fighting the war against banditry, kidnapping, cattle rustling in Zamfara state?

Strictly speaking, issue of security is squarely the prerogative of the Federal Government, because it falls under the exclusive legislative list in the Second Schedule of the Constitution. However, since the Federal Government has failed to provide the security, the state governors have no option but to rise up to defend their people. That was how the idea of Amotekun came up in the South- West.

The security outfit is unconstitutional, so to speak. But it was a child of necessity. It is not out of place for the Governors of the North- West to think along that line and come up with a similar security arrangement and not wait until bandits envelopes the entire region. If it is difficult to have the cooperation of all the seven state governors in the region, every serious governor should think of necessary security measures to protect his people.

Banditry thrives in Zamfara state, does it mean the deployment of Kinetic and non-Kinetic approaches by the security apparatus is not working?

Government has deployed kinetic and non- kinetic approaches in dealing with the issue. In the early life of this government, the Governor engaged the bandits on reconciliation and peace accord. There was reasonable degree of peace in the state at that time. Unfortunately, after some months the attacks resurfaced after the collapse of the dialogue.

As a sharia state, government needs to be guided on the best approach for dialogue with bandits. In Islam, government does not dialogue with a bandit who has been captured or over- powered. A sincere bandit who has surrendered his weapons should be reintegrated into the society and must not go back to his old trade of banditry and, any bandit who is not ready for  dialogue, government should use its apparatus to arrest, investigate, prosecute and punish him according to the law.

Incidentally, the Governor has assented to the banditry law that provides death penalty for the bandits. There should be a Banditry Commission in the state to manage all the intelligence and investigation of banditry- related offences. The Commission should  compose persons of unquestionable integrity, competence and capacity to deliver. A special court should be designated as ‘Banditry Court’ to prosecute cases of banditry in the state. The maximum duration for any case before the court should be two months.