by Patience Ivie Ihejirika and Esther Iliya
in News
0 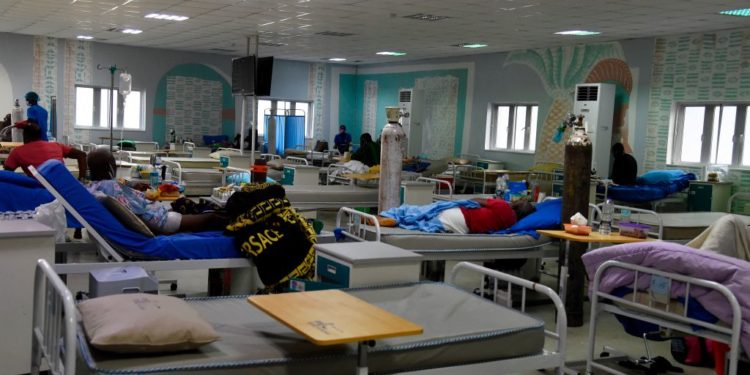 COVID-19 patients suffering from acute respiratory challenge lies on hospital bed at a male ward in Lagos State Isolation Centre, Yaba, Lagos on January 22, 2021. - The number of confirmed COVID-19 cases in Nigeria is increasing rapidly following daily reports by the Nigeria Centre for Disease Control (NCDC) even as Lagos, Nigeria's commercial capital, accounted for the highest number of cases in the country. (Photo by PIUS UTOMI EKPEI / AFP) (Photo by PIUS UTOMI EKPEI/AFP via Getty Images)

A new research report released by The ONE Campaign, in partnership with National Advocates for Health, Nigeria Health Watch, Public and Private Development Centre (PPDC) and other partners, has shown that health systems in 18 states of the federation are weak.

It said the development had led to poor healthcare service delivery, especially in public facilities in the affected states.

The report which was released at a stakeholders’ event in Abuja, identified Zamfara State as the worst performing state in the country, especially in primary healthcare (PHC) delivery while ranking the Federal capital Territory (FCT), Enugu and Anambra States as the most performing states in PHC service delivery.

“The Basic Healthcare Provision Fund (BHCPF) was poorly implemented in 13 states. Zamfara is the most difficult state in Nigeria to access PHC. The basic causes of Nigeria’s deteriorating health care system are the country’s weak governance structures and operational inefficiencies,” the report revealed.

At the event, The ONE Campaign’s Nigeria director, Stanley Achonu, said in 2014, the National Health Act established the Basic Health Care Provision Fund (BHCPF) to address funding gaps hampering effective primary healthcare delivery across the country. The BHCPF comprises one percent of the federal government Consolidated Revenue Fund (CRF) and additional contributions from other funding sources. It is designed to support the effective delivery of primary healthcare services, provision of a basic minimum package of health services (BMPHS) and emergency medical treatment (EMT) to all Nigerians.

He expressed concern that despite the provisions of the BHCPF, the research exposed the precarious state of healthcare in Nigeria, where access to and utilisation of health services continues to be marred by systemic challenges across the states.

Achonu said the public health facilities in all 36 states and the FCT are deficient, and the experiences of community members seeking health care at public facilities are consistently awful.

Unveiling the report, the chairman, Senate Committee on Health, Senator Ibrahim Oloriegbe, stressed the need for continuous oversight to ensure that the BHCPF works for Nigerians. He said, “We have recorded successes at the federal level because of the independence and the interdependence between the executive and the legislative arms of government and because the National Assembly has been able to perform its oversight functions. This must be replicated across the different state houses.

The chairman, National Advocates for Health Group, Hon. Muhammad Usman, called on the government to provide the required leadership to ensure that primary healthcare is improved across the country.

As part of its recommendations, the report proposes that states should provide political leadership for establishing a State Health Insurance Agency, develop an electronic workforce registry at the state level, support management of human resources for health, and develop a health system-wide accountability and performance management framework.