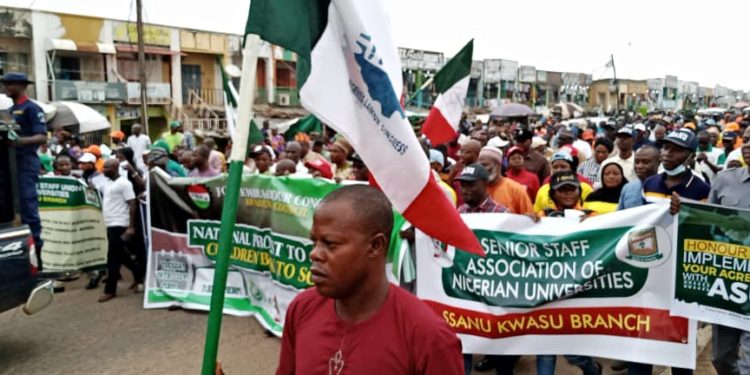 Workers in Kwara State under the aegis of the Nigeria Labour Congress (NLC), on Tuesday, staged a rally in solidarity with striking university teachers.

The protesting workers who cut across the NLC, ASUU, NASU, SANU and other allied unions, went round areas like Post Office, Challenge, A-Division Roundabout and Government House on Ahmadu Bello Way in Ilorin, the state capital, before submitting a letter to the state government.

The NLC chairman in the state, Comrade Aliyu Isa-Ore, said the rally was organised in solidarity with the striking members of the Academic Staff Union of Universities (ASUU) to press home their demands from the federal government.

Isa-Ore explained that if the federal government refuses to grant their demand after the rally, the union will call out workers on a three-day warning strike.

In their separate remarks, the chairman of ASUU, University of Ilorin chapter, Prof Moyosore Ajao, and the chairman of the National Association of Academic Technologists Union, Comrade Awolola Femi, commended the NLC for supporting their cause.