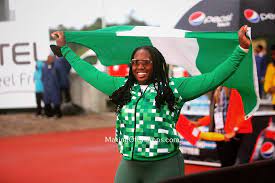 Onyekwere threw 61.70 an SB ahead of England’s Jade Lally (58.42m) to win gold for the Team while her compatriot, Obiageri Amaechi, settled for bronze with 56.99.

Earlier on Tuesday, 19-year-old Nigerian weightlifter, Taiwo Liadi, won silver medal by finishing second behind Canadian’s Maya Laylor, who set a new record in the game with a lift of 128kg in the women’s 76kg weightlifting event.

Liadi, who was born June 14, 2002, set a junior record with a lift of 120kg in the clean and jerk to win the silver medal while Nauru’s Maximina Uepa came third to win the bronze medal.

Team Nigeria, now ranked 8th on the medals’ table of event, had earlier won two gold and two bronze medals in the weightlifting events since the start of the Birmingham Games.

Team Nigeria will be aiming to add to its five-medal haul at the Games in Birmingham as the trio of Favour Oghene Tejiri Ashe, Raymond Ekevwo and Godson Oghenebrume all qualified for the semi-final of the men’s 100m event in athletics.

Having all three representatives featuring in the semis increases Nigeria’s chances of finishing with a medal in the blue ribband event.

While Ashe and Ekevwo finished among the top 10 from the heats in times of 10.12s and 10.14s to get automatic qualification spots, Oghenebrume had to wait with his time of 10.36s to get passing as one of the non-automatic qualifiers.

Nigeria’s fastest man, Ashe, won his heat, beating the likes of Nethaneel Mitchell-Blake and got so comfortable he just about jogged to win it. Ekevwo repeated the feat in heat four where he finished faster than Jamaican, Kemar Bailey-Cole.