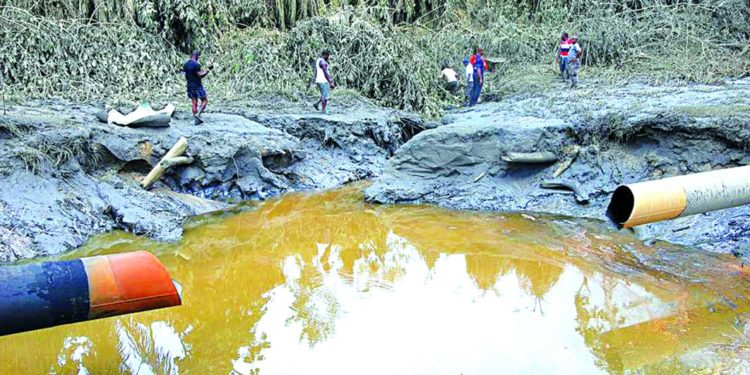 Not many Nigerians were surprised when the Minister of State for Petroleum Resources, Timipre Sylva, recently said that the country loses 400,000 barrels of crude daily through the unpatriotic activities of oil thieves.

He described the development as a “national emergency” just as he expressed regret that the nation had fallen short of OPEC daily quota – from 1.8 million barrels to 1.4 million barrels due that unwholesome behaviour. He, however, warned that such a huge economic loss was capable of crippling the nation’s economy, if not effectively checked.

The figures emanated from the summation using 400,000 barrels per day and 146 million barrels per year losses to oil thieves, a situation that has become a nightmare for oil companies, the government, and other concerned stakeholders. Recent reports also pointed out that the country lost not less than $3.5 billion in revenue to crude oil theft in 2021 alone, representing about 10 percent of the country’s foreign reserves.

As one of the measures designed to contain the malaise, the federal government, in September last year, set up a committee on the recovery of crude oil and illegally refined petroleum products. The group comprised the Department of Petroleum Resources, the Nigeria National Petroleum Corporation, the National Oil Spill Detection and Response Agency, the Nigerian Army and Navy, and the Nigeria Security and Civil Defence Corps. In spite of this, and with the committee in place, Nigeria still experienced huge losses throughout the rest of the year.

In the considered opinion of this newspaper, the resultant fall in revenue, is something to worry about. It is important, therefore, that this development, unacceptable as it is, should not be allowed to linger. Experts have adduced the effects of oil theft to include pipeline vandalism, criminal sabotage, and illegal refineries in oil-producing communities, which threatens the safety and livelihoods of the environment where these illegal oil operations are carried out.

No doubt, it can be reasoned that crude oil theft has continued to thrive because of the collusion of security officials, community, and political leaders with criminal elements working on their behalf.

It is worrisome that despite the negative effects of the oil theft menace on the national revenue, oil being the highest revenue earner for the country, successive governments have continued to pay lip service to this brazen act of sabotage. That some oil majors are already divesting because of the stealing seem not to matter to the policy makers.

Sadly, due to a shortfall in revenue, the government has resorted to borrowing to fund budgets. At the moment, almost all the major ongoing projects are being funded with borrowed funds igniting fears that the country might be heading into another debt trap, not too long after it received debt forgiveness from the Paris Club.

It is instructive to note that oil theft in Nigeria is made easier by several factors. Aging infrastructure, such as oil pipelines, makes it easier for thieves to gain access to the crude. In addition, general underinvestment across the sector and poor security of the country’s waterways means little is being done to tackle the crime. Above all else, the crime is gaining gumption because of the involvement of high-profile individuals who have the resources and the connection to engage in it. It is an organised crime for the ‘senior boys and girls’ that is why it appears intractable.

Nonetheless, this newspaper strongly suggests that the federal government funds technologies that could monitor oil and gas pipelines across the country to recognise sabotage or human interference and prevent such.

The country cannot afford to allow this mindless stealing of the country’s patrimony to continue. This is more so that its revenue sources have shrunk in the past years, forcing it to rely more on borrowing. Still, regardless of the instability experienced sometimes in the international oil market, if our oil production and sales are properly managed, some of the desperate tax regimes being currently introduced to shore up the government’s revenue, with their excruciating adverse effects on the citizens, might not be necessary.

Needless to say, the government must wield the big stick. Security personnel, community, and political leaders involved in this sleaze must be named and shamed. Beyond that, the government must go the whole hog by prosecuting the culprits to serve as deterrent. All that is required is political will which is presently lacking.