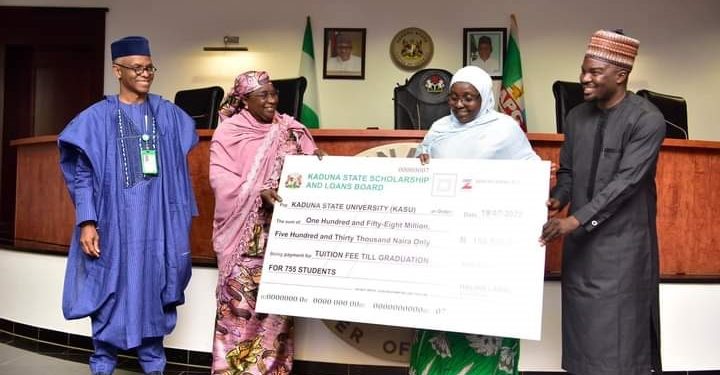 Governor Nasir El-Rufai, Deputy Governor of Kaduna state, Dr Hadiza Balarabe and Executive Secretary of Kaduna State Scholarship and Loans Board, Malam Hassan Rilwan, presenting a symbolic cheque to one of the beneficiaries

Governor Nasir El-Rufai has said that his administration ended the old scholarship scheme where previous governments paid between N10,000 to N20,000 to students annually and replaced it with a model that covers their entire tuition fees and upkeep allowances.

The governor presented cheques worth over N219 million to students under the Need and Merit Based Scholarship schemes of Kaduna State Government, covering tuition fees of 1,251 students in three of the state-owned tertiary institutions till their graduation.

El-Rufai who spoke during the presentation of cheques to beneficiaries, said one of the cardinal principles of his administration is to promote equality of opportunity for all residents of the state.

According to El-Rufai, there is also provision for a loans window, for students who could not access scholarship through either the Merit or Needs Based module, to pursue their education at home or abroad.

The governor also disclosed that his administration will establish State Education Endowment Fund, to source for funds solely dedicated to education development, adding that an Executive Bill has been sent to the State House of Assembly to that effect.

Also speaking, the Executive Secretary of Kaduna State Scholarship and Loans Board, Malam Hassan Rilwan, said the Board has received cash backing of the sum of N524.128 million for the payment of tuition fees till graduation, which will be sent directly to tertiary institutions across Nigeria.

The Executive Secretary further disclosed that the 534 students that qualified for the Needs Based Scholarship were gotten from the state Social Register, out of the 1,251 beneficiaries.

Malam Hassan promised that the processing of other students within and outside the state-owned tertiary institutions will also commence in August, 2022.

“With this payment from the government, the judicious implementation to ensure that only those who qualify and no one else, lays squarely in the hands of the Board staff and the tertiary institutions.

‘’The Board will sign MOUs with each of the institutions to ensure that they provide dedicated accounts for these funds, to aid easy reconciliation and to ensure compliance and monitoring,’’ he said.

The Executive Secretary disclosed that ‘’ the Board is proposing a fund-raising dinner before the end of the year as a way of launching the proposed Education Endowment Fund.’’