One of the spokespersons of the 2023 Atiku Presidential Campaign, Barrister Daniel Bwala, has said that the Kaduna State governor, Nasir El-Rufai, will eventually join the opposition Peoples Democratic Party (PDP) before the 2023 general elections. 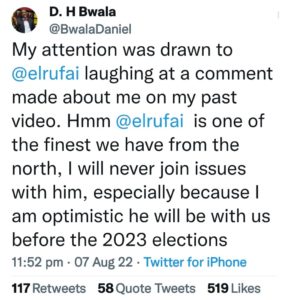 Bwala, who made the claim on Monday via his verified Twitter handle, said his attention was drawn to a scenario where Governor El-Rufai was laughing about a comment made about him (Bwala) on a past video.

Recall that Bwala, who was an aide of the Deputy Senate President, Ovie Omo-Agege, recently quit the position and defected to the Peoples Democratic Party (PDP) from the All Progressives Congress (APC) in protest over the latter’s choice of a Muslim-Muslim presidential ticket.

While in APC, Bwala made alot of TV appearances where he harshly criticised the opposition PDP, his new party.

Just last week, Bwala alongside a vocal former federal lawmaker, Senator Dino Melaye, was appointed as spokesperson of the Atiku Presidential Campaign for the 2023 Elections.

The Atiku Presidential Campaign spokesman, however, said he won’t join issues with the Kaduna State governor because the latter will end in their camp before 2023.

Bwala wrote: “My attention was drawn to @elrufai laughing at a comment made about me on my past video.

“Hmm @elrufai is one of the finest we have from the north, I will never join issues with him, especially because I am optimistic he will be with us before the 2023 elections.”