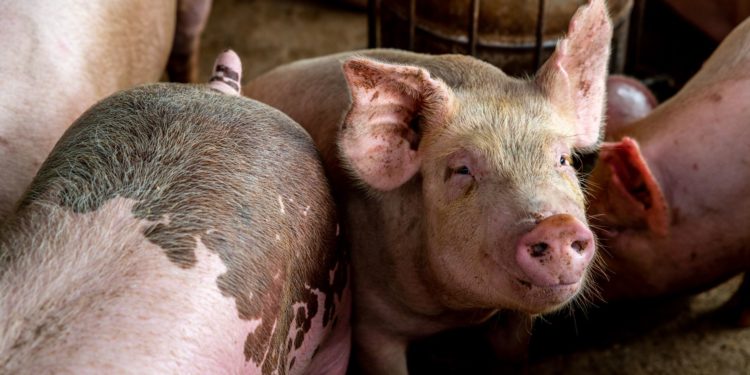 Fear of the spread of African Swine Fever (ASF) which is spreading fast like wildfire has gripped pig farmers in Plateau State.

Most of the big pig farmers in the state are counting their losses as a result of the spread of this disease which is common with pig.

Investigation by our correspondent in Jos, the Plateau State capital revealed that some farmers on a daily basis recorded high mortality rates as a result of this ugly development.

One of the affected farmers, John Dungs told LEADERSHIP that he spent over N10 million to bring exotic pig breeds   that is highly resistance to diseases but unfortunately they all die of African Swine Fever despite the fact that he ensured and maintained bio -security on his farm.

Similarly, another victim called Baba Miango in Jos South LGA who was unaware of the disease told our correspondent that he believed one of his neighbours poisoned his pigs.

According him, “Yesterday all my pigs were all looking healthy, only for me to wake up last night to discover that 10 were already dead.”

Another pig farmer, Boniface Kura who lost 20 matured pigs in his farm said they sold the pigs at a giveaway price depending on the body weight.

According to him, 1kg of pork sells for N1, 400 and called on the state government to come to the aid of pig farmers to reduce their loses.

Meanwhile the state commissioner for agriculture Dr Hosea Finangwai has confirmed the development to our correspondent on phone.

When asked about the safety measures the State Government has put in place to prevent further spread of disease, the commissioner said he will contact the director of veterinary of the Ministry and get back to our correspondent. At the time of filing this report he did not get back as earlier promised.

I Paid N11m To Free My Wife And I – Katsina Abductee

I Paid N11m To Free My Wife And I – Katsina Abductee