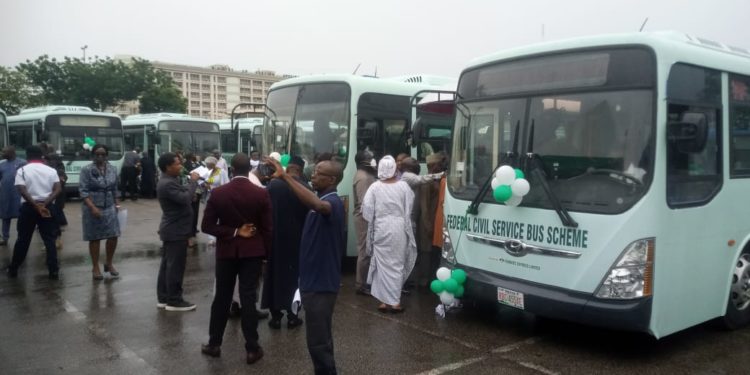 The Federal Government of Nigeria has launched 20 high-tech buses powered by Compressed Natural Gas (CNG) to ease the transportation burden of civil servants in the Federal Capital Territory (FCT).

Head of the Civil Service of the Federation, Dr. Folashade Yemi-Esan, while speaking during the launch of the buses in Abuja on Tuesday, explained that the project was facilitated in collaboration with FEMADEC Group, a private engineering and construction company.

She stressed that the project will help reduce the cost of transportation of civil servants and further decongest the bus stops around the Federal Secretariat in Abuja, which is usually overcrowded during the close of work.

Yemi-Esan added that easing the transportation of civil servants has been one of the targets of her administration, adding that the government has always sought ways to achieve a healthier and safer environment for civil servants.

“This pillar is targeted at addressing issues of the socio-economic wellbeing of civil servants, which if not tackled holistically, is capable of impeding the efficiency of workers. The number of buses will be scaled up to 40 in the second phase of the project,” she added.

Permanent Secretary, Service Welfare Office, Ngozi Onwudiwe, noted that the pilot phase of the scheme will commence across six routes in the FCT.

Chief Executive Officer of FEMADEC Group, Fola Akinnola, highlighted that the initiative to provide the buses started in 2019 when the Federal Government moved to switch from petrol-powered cars to gas-powered vehicles.

He added that the buses, which will run on CNG, came at a critical time when Nigeria was battling with the rising cost of diesel.