For A Sustained Fight Against Oil Theft 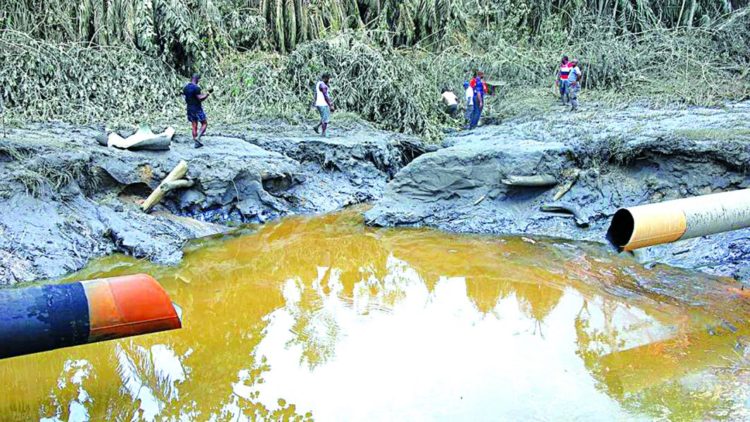 The fight against illegal lifting of crude oil, often referred to as oil theft in the Niger Delta region, may have started yielding results with the renewed onslaught spearheaded by the management of Nigerian National Petroleum Corporation Limited (NNPCL). The scale of oil theft is described by industry watchers as enormous to the extent that pipelines are taken from NNPCL main trunk lines to abandoned platforms.

Responding to public outcry and the devastating negative impact on the economy of this act by some highly placed unpatriotic people, the federal government took steps to secure oil installations in the areas and in the process about 295 illegal connections to NNPC pipelines, many of which have been in sabotage operations for years, were discovered. These were in addition to many illegal refineries that had to be destroyed.

Sequel to this positive development, a report by the Nigerian Upstream Petroleum Regulatory Commission (NUPRC) indicated an appreciable increase in oil production for early October in contrast to what obtained in August and September. The report stated that oil production averaged 1,014,485 barrels per day in October representing 8.18 per cent increase compared to September figures of 937,766 million barrels a day.

This is in addition to the arrest of 87-meter-long rogue oil tanker MT Dein that, at the time of arrest, had pumped between 600 to 650 cubic metres of crude oil into five compartments of the vessel with 12 compartments from an illegal connection attached to a CNL crude pipeline in the Escravos area.

Curiously, in our view, because of the involvement of high-net-worth individuals and groups in this criminal endeavour and the determined interest of NNPCL to bring it to an end, there are already reports that the bad elements behind the illicit act are beginning to fight back.

At the peak of this national sabotage, the Group Chief Executive Officer (GCEO) of the Nigerian National Petroleum Company Limited (NNPC), Mr Mele Kyari, had raised an alarm that oil thieves, who have unleashed a devastating sabotage of the Nigerian economy, are threatening his life over his role in curtailing the mind-boggling theft of the nation’s crude resources.

Kyari further alleged that mosques, churches, security agencies and host communities to pipelines are part of an unholy alliance against Nigeria and maintained that his decision to engage the indigenous pipeline surveillance firm, Government Ekpemupolo’s Tantita Security Services Limited is irrevocable.

Furthermore, reports quoted the Minister of State for Petroleum, Chief Timipre Sylva as saying that several people who are highly placed and wealthy are involved in oil theft in the Niger Delta just as investigations into the crime had commenced.

It is pertinent to stress at this point that all those engaged in this national shame ought to be exposed no matter how highly placed. We say this because of past experiences in matters like this where only small fries and inconsequential characters are presented to the public while the main backers are shielded because of who they are, the position they occupy in the society and, especially, their political affiliations.

This newspaper is gratified that the NNPCL chief is aware that the reaction from the thieves, as far as threats to his personal safety is concerned, is the price he has to pay for safeguarding the all-important national resource. He gave the assurance that the threat from the dangerous cabal of oil thieves in Nigeria and their international collaborators, will not dissuade him from the task of responding appropriately to the grave threat to the economy and, indeed, the task of repositioning the oil and gas sector. In our considered opinion, it would help the investigation process if Mr Kyari could reveal the identity of those who have threatened his life over the sensitive matter.

We also note that it is important that the fight against oil theft, a matter of national economic priority, is pursued even more vigorously. In our view, it is a campaign against the abominable abuse of our nation’s resources which must be sustained.

Oil theft has become a malignant cancer in Nigeria for years with unimaginable volumes of oil being lifted illegally by some cabals in the oil sector. Recently, the NNPCL said it uncovered an illegal oil connection from Forcados Terminal that operated for nine years with about 600,000 barrels per day of oil lost in the same period.

Figures from the Nigerian Upstream Petroleum Regulatory Commission had shown that Nigeria which is yoked by the dubious subsidy crisis had lost nothing less than 120 million barrels of crude oil from January and September 2022. The NUPRC stated that the crude oil loss in production translates to $12.6 billion in less than a year.  Nigeria’s submission to the OPEC Secretariat put September crude output at just 938,000 barrels per day, just over half its quota for the month, while total liquids production was only 1.14 million barrels per day. No responsible government or corporation will allow this kind of drain to persist.

These represented the magnitude of existential economic crisis of mind-boggling proportion that stirred Mr Kyari to search for desperate solutions to one of the largest organised crimes targeting the nation’s economy.

Sadly, in our view, there are widespread reports of collusion between oil thieves, security personnel, wealthy and influential individuals in the region. This is why the gains of the ongoing security arrangement should be sustained. Even more importantly, the service chiefs and security commanders must ensure that their men cooperate with NNPCL in the ongoing effort to bring this national economic waste to an end in the interest of Nigeria and her citizens. We also urge the federal government, as a matter of duty, to protect the NNPCL chief and ensure that he does not come to any hurt given the fact that these criminals are desperate people who will go to any length to protect their interest.