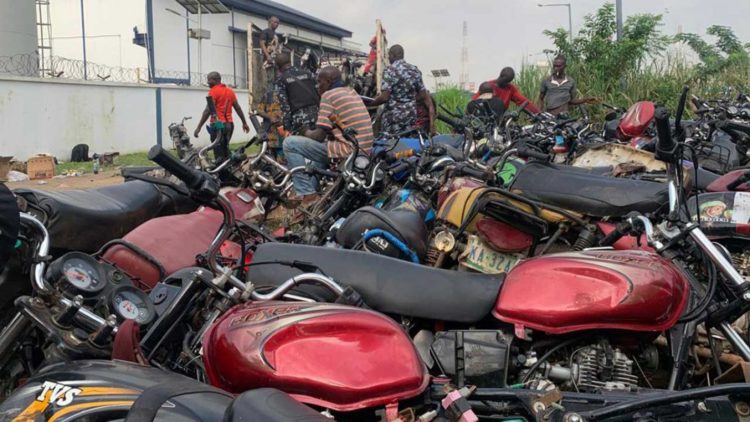 The Federal Capital Territory Administration (FCTA) through the Ministerial Taskforce Team has impounded over 100 commercial motorcycles popularly called ‘Okada’ for various traffic offenses along the Airport Road corridor in Abuja.

Senior special assistant on Monitoring, Inspection, and Enforcement to the Minister of FCT, Comrade Ikharo Attah, while speaking to journalists said the Minister of FCT, Malam Muhammad Bello, has given a matching order that motorcycles should be removed because they are not allowed to ply the main roads.

He said that despite the ministerial directive, they still find motorcycles heavily driving against traffic on the expressway, contravening traffic rules, and the riders were found behaving unruly and hurting people.

“There was massive impounding of Okadas, we impounded over 100. For us, attack is a regular thing, we are used to being attacked, we have been attacked severally.

“Before the Joint Task Force came on board, the security men have always been under attack by these Okada riders, it is a regular thing here.

“What is going on here is that the people or Okada riders do not understand the resolve of the Minister of FCT, to keep the city clean and properly under control, they think they could have ungoverned spaces here, especially in Lugbe.

“The Okada riders along Lugbe FHA and Lugbe Car Wash have been a problem here while the men are removing them from the expressway, some of them Okada riders in Lugbe Car Wash attacked them and we took the okada and cleared them away. We recovered knives, cutlasses,” he said.

Head of the Directorate of Road Traffic Services (DRT), Adamu Shehu, urged motorcycle riders to stop violating traffic rules because anytime they are caught, their motorcycles will be impounded and crushed.

“My message is that they should stop driving against the traffic because when we see them, we are going to seize their okada. All the okadas were impounded today, we will go through the court process and we are going to crush them.

“My appeal to them is that they should please always abide by the traffic rules they should stop coming to the main road, taking one way, to avoid arrest all the time and avoid being impounded. We have over 100 okadas that were seized today,” he stated.