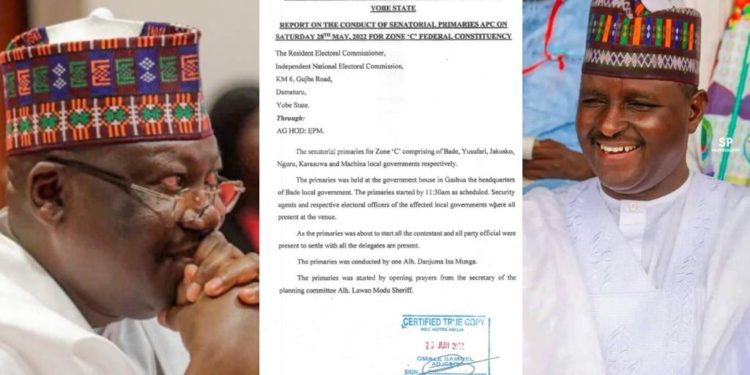 A Certified True Copy (CTC) of the report of INEC team sent to monitor the primary election signed by Omale Samuel, dated May 28, 2022, also showed that Machina polled 289 votes out of 300 delegates at the exercise.

Also, another report from the Yobe State office of INEC on the conduct of Yobe North senatorial primary election (Zone ‘C’) shows that the exercise was held at the Government House in Gashua, the headquarters of Bade local government area of the State.

The report noted that the primaries started by 11:30am as scheduled, adding that security agents and respective electoral officers of the affected local governments were all present at the venue.

“As the primaries was about to start, all the contestants and all party officials were present to settle with all the delegates are present.

“The primaries was started by opening prayers from the secretary of the planning committee, Alh. Lawan Modu Sheriff,” the CTC said.

The APC Yobe North senatorial ticket has sparked controversy after the winner, Bashir Machina, insisted that he would not step down for Senate President Ahmad Lawan, who is currently representing the senatorial seat.

The national leadership of APC has, however, forwarded Lawan’s to INEC for recognition as the candidate of the party for the Yobe North election in 2023, a development has sparked outrage on the social media.