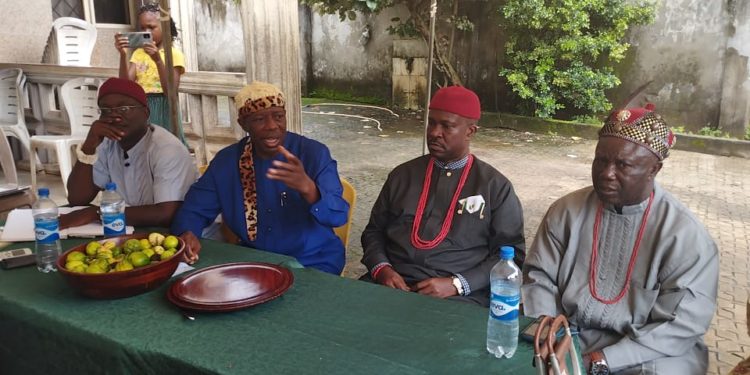 In recognition of the exemplary strides of Governor Hope Uzodimma of Imo State in governance, traditional rulers from the three local government areas of the famed Mbaise nation, have decided to jointly confer a grand honour on the governor in Mbaise, Imo State.

At a meeting held on Saturday, August 13, 2022, the traditional rulers unanimously agreed that Governor Uzodimma was well deserving of such honour, given the dividends of democracy he has delivered to the people of the state in general and the Mbaise people in particular.

Hosted by HRH Eze Nwaturuocha in Nguru, the meeting was graced by the State’s Commissioner for Homeland Security and Vigilante Affairs, Dr. Ugorji Okechukwu Ugorji, who was the Special Guest and over 36 traditional rulers.

By the end of the meeting, Ugorji was asked to convey the resolution of the traditional rulers to Governor Uzodimma, who is to choose a date and time for the grand conferment of honour on him by all the traditional rulers of Mbaise, in appreciation of the roads he is building, the appointments he has given to their sons and daughters, and the great care and respect he has shown to Ndi Eze (Traditional Rulers).

They also requested a face-to-face meeting with the governor, again on a date and time of his choice.

The traditional rulers further passed a vote of confidence on Governor Hope Uzodimma by the unanimous decision to confer on him a chieftancy title.

The royal fathers noted that they do not want such an honour to be given at a controversial Iriji (New Yam Festival) activity that is not being held on the sacrosanct date of August 15, as it appears being planned by some people in Owerri for August 16, 2022.

Dr. Ugorji who reportedly had to cancel a booked flight to Abuja in order to honour the invitation from the traditional rulers, assured them that as a son of a traditional ruler himself, he would not disrespect the sacred tradition and dictates of Iriji in Mbaise.

He promised to take their resolution to Governor Uzodimma, adding that it was his wish that in the not-too-distant future, the governor would make out time to be heralded and celebrated by a united pantheon of Mbaise traditional rulers and professionals.

Every traditional ruler present at the meeting spoke glowingly about the governor and the great strides he has made as the Chief Executive Officer of Imo State.

They, however, decried what they referred to as the disappointing antics of some people in Owerri, the State capital, who appear to have no respect or regard for traditional institutions.

The gathering of the traditional rulers was chaired by HRH Eze Leo Nwokocha, with HRH Eze Sabinus Nwaneche as vice chairman.