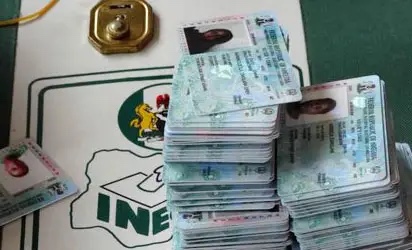 Gubernatorial candidate of the All Progressives Congress (APC) in Benue State, Rev. Fr. Hyacinth Alia has described those using Alia/Ode Campaign Organisation to collect details of voters in the forthcoming elections as mischief-makers.

Alia, who dismissed himself from those embarking on that act, urged party members to disregard the forms used by the mischief makers.

Media aide to Fr. Alia, Isaac Uzaan, in a statement, said “our attention has been drawn to a ‘Canvasser’s Form’ going round in different corners purported to have come from Alia/Ode Campaign Organization and meant to select those who would canvass support for the APC party in Benue State. We make bold to asked all our teeming supporters to disregard such misguided forms”

He added that “the said Canvasser’s Form features Name, phone No:, Local Government, Ward, Kindred, Pulling Unit, PU code, PVC No:, Account No:, Account Name, and Bank, describing the act as purely the work of mischief makers who do not mean well for Benue people and the APC party.

According to him, “the Governorship Candidate of the All Progressives Congress (APC) in Benue State Rev. Fr. Hyacinth Alia and his Deputy, Barr. Sam Ode have not even imagined anything close to that, and they have never, and would never authorised the production of any Canvasser’s Form, following which they have distanced themselves completely from it.”

He said, “anyone who produced and is distributing any Canvasser’s Form in the name of Alia/Ode Campaign Organization is doing that for a purpose very injurious to the success of APC in Benue State.”

He urged the Public to disregard any Form given to them by anyone for any purpose associated with the APC party in Benue State.

“We therefore, advised the Public to keep careful watch for possible tactics by our enemies who are so determined to wreak damage to the efforts we have long put in place to enthrone good governance in Benue State,” the statement added.

Maimuna’s Memoir: Japa And Other Stories: Chai!, The Madness In This Country