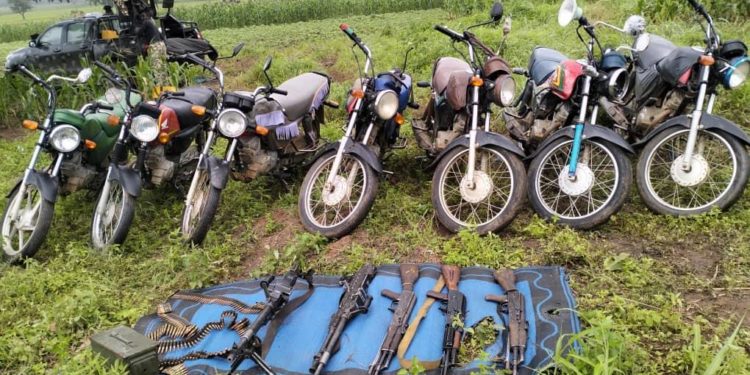 Military sources said the airstrike at Kurebe was undertaken after intelligence revealed that the terrorists had assembled for an important meeting hosted by Aminu Duniya, a Boko Haram terrorist commander.

“Aminu Duniya was said to have invited the terrorists to his enclave at Kurebe to the meeting which obviously attracted numerous terrorists who came in large numbers on their motorbikes,” a source said.

Intelligence revealed that the air strike was successful and resulted in the death of many terrorists though it remains unclear if Aminu Duniya was also neutralised in the strike.

Kurebe is a known terrorists haven as the local inhabitants of Kurebe have since vacated the villages in and around the area after the terrorists overran the area in 2021.

Meanwhile, the activities of the terrorists in Kaduna State have continued to make life unbearable to locals in the area.

“So, when intelligence had revealed that the terrorists planned on over-runing a nearby village within the vicinity, the military saw that as an opportunity to surprise them,” another source stated.

He added that the Nigeria Army troops laid siege around the location, while NAF aircraft were directed to the suspected location of the terrorists which was then attacked in Chikun LGA of Kaduna State.

He said, “several terrorists were confirmed killed after the strike.”

LEADERSHIP earlier reported how security forces recorded a major success in the ongoing Operation Forest Sanity against terrorists in the State, as scores of bandits were neutralised by ground troops and air assets.

Commissioner, Kaduna State Ministry of Internal Security and Home Affairs, Samuel Aruwan, in a statement on Saturday, said the terrorists were killed in Galbi, Chikun local government area of the State.

Aruwan said the security report was conveyed in an operational feedback to the Kaduna State government from the security agencies.

He further explained that two General Purpose Machine Guns (GPMGs), three AK47 rifles and seven motorcycles were recovered from the enclave of the neutralised bandits.