The National Broadcasting Commission (NBC) has cautioned broadcast stations against airing materials that could incite citizens.

The regulatory agency said it noticed the misuse of the airwaves to propagate incendiary material by different groups in some broadcasting stations in recent times.

In a statement issued on Friday, NBC director-general, Balarabe Ilelah, raised concern over “divisive” comments by guests who featured on programmes aired by broadcast stations.

Ilelah added that broadcasters should take the necessary steps to avoid such situations. 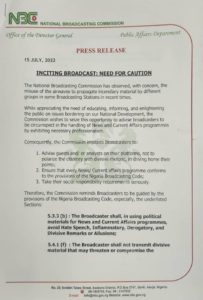 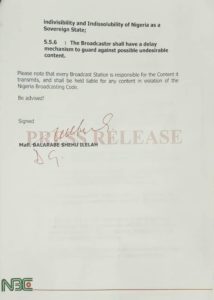 He stressed that any broadcast station that flouts the broadcasting code will be held liable.

The NBC boss, however, did not mention what programmes or stations flouted the rules that necessitated the caution.

The statement reads in part: “While appreciating the need of educating, informing, and enlightening the public on issues bordering on our National Development, the Commission wishes to seize this opportunity to advise broadcasters to be circumspect in the handling of News and Current Affairs programmes by exhibiting necessary professionalism.

“Consequently, the Commission implores Broadcasters to: Advise guests and/or analysts on their platforms, not to polarise the citizenry with divisive rhetoric, in driving home their points; ensure that every News/Current affairs programme conforms to the provisions of the Nigeria Broadcasting Code; take their social responsibility requirements seriously.”

Ilelah also listed some provisions of the NBC code, which broadcast stations should note, with regards to cautioning against remarks capable of causing disunity.

It said, “5.3.3 (b): The Broadcaster shall, in using political materials for News and Current Affairs programmes, avoid Hate Speech, Inflammatory, Derogatory, and Divisive Remarks or Allusions.

“5.4.1 (f): The Broadcaster shall not transmit divisive material that may threaten or compromise the indivisibility and Indissolubility of Nigeria as a Sovereign State.

“5.5.6: The Broadcaster shall have a delay mechanism to guard against possible undesirable content.”

The DG added that every broadcast station will be responsible for the content it transmits, and shall be held liable for any content in violation of the Nigeria Broadcasting Code.