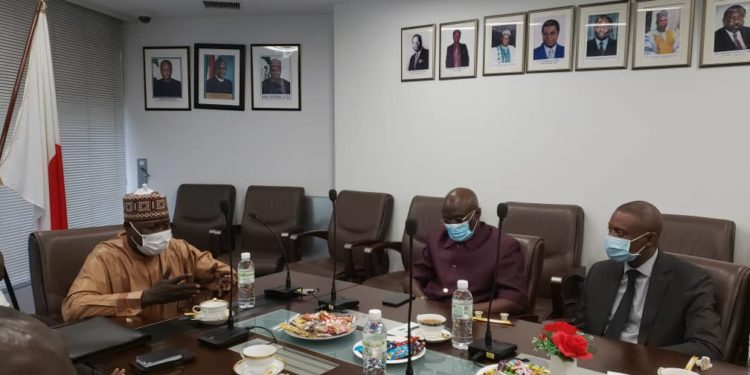 The Nigerian Ambassador to Japan, Husaini Moriki, has commended the Director General of the National Automotive Design and Development Council (NADDC), Jelani Aliyu, for reviving the Nigerian Automotive Industry.

Amb. Moriki made the commendation during Nigeria’s delegation meeting with key Japanese automotive manufacturers in Japan.

According to him, the NADDC DG has successfully brought many reform initiatives to the industry that have yielded results in terms of investment capacity building of Nigeria’s auto industry players.

The Ambassador, therefore, urged the Japanese companies to identify areas of focus that the companies would like the Nigerian government to intervene in.

Moriki added that the intervention will be aimed at providing a better business environment, especially now that the NAIDP and the Auto Policy are being reviewed by the NADDC.

The Ambassador specifically urged the Japanese companies to collaborate with the NADDC in training and up-skilling of Nigerian youths at the 18 Automotive Training Centers built by the agency across the country.

Aliyu noted that these larger investments would come at a time when the need for diversification in Nigeria is paramount to the country’s economy as the population continues to grow.

“The discussions with the companies were very fruitful, with strong potential for the various manufacturers to significantly increase their operations and market footprint in Nigeria, and contribute at an even higher level to the growth and sustainability of the Nigerian Automotive space,” Aliyu disclosed.

He added that the agency had engaged an international firm, KPMG, to support with the review of the Auto Policy in order to beef it up to the current pattern of global and regional automotive production and distribution.

He said: “KPMG is getting good support from the AAAM – African Association of Automotive Manufacturers. As soon as the draft policy is done by KPMG, it shall go as an executive bill to the National Assembly.

“The Senate and House Committees on Industry are giving their full support towards having this reviewed policy be backed by a legal framework.”

While highlighting some of key areas of the reviewed policy, he said the draft, when it becomes law, would further boost the financial advantages of local production/assembly, provide clear import duty differential between locally assembled vehicles and those imported fully built and also provide tax waivers.

Other key areas would include facilitating the establishment of dedicated customs corridors/services, provision of single digit capital financing for both manufacturers and buyers, mandatory government patronage, all in favour of local production/assembly.

On his part, chairman, Nigeria’s House of Representatives Committee on Industry, Hon. Enitan Badru, promised to provide necessary legislative support to the new auto policy, so that it gives the investors the confidence and stability to invest in Nigeria.

He stressed the importance of the vehicle finance scheme for the purchase of locally produced vehicles.