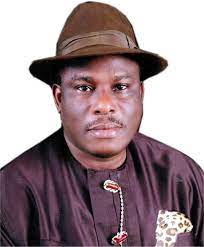 A senator who represented Rivers West senatorial district, Senator Wilson Ake, has mocked his political party, the All Progressives Congress (APC) and the ruling Peoples Democratic Party (PDP) in Rivers State over their choice of governorship candidates.

A business mogul, Tonye Cole is the APC governorship candidate while a former accountant-general of Rivers State, Sir Siminalaye Fubara is the PDP standard bearer.
Ake, who spoke in Bori, headquarters of Khana local government area of the state during the inauguration of registration officers for the Project SMA 2023, the campaign machinery of Senator Magnus Ngei Abe, said both Cole and Fubara were not known to the people of the state.

He said, “Have you seen the two candidates they brought out in APC and PDP. These are people you have never seen before but Abe is somebody you have known for a very long time. So, we cannot afford to fail because if we fail, Rivers State will be in trouble. The man we know is Senator Magnus Ngei Abe and he knows us.”

The former senator declared that no human being will prevent Abe from being on the ballot to contest the 2023 governorship election in the state.

“We are to confirm the statement made by Abe that we will be on the ballot in 2023. No human will stop Abe from being on the ballot to contest for the governorship in 2023. What we are doing is a prelude.

“We are here to tell you that from what we are seeing, Abe will be at Government House come 2023. We are knocking at the Government House door and asking the occupant to starting packing to vacate.”

Speaking during the event, former Rivers State attorney-general and commissioner for justice, Wogu Boms, said the Project SMA 2023 was in the process of producing the first Rivers State governor of Ogoni extraction.

My Wife’s Burial Will Expose Infrastructure Decay In Abia – Wabara