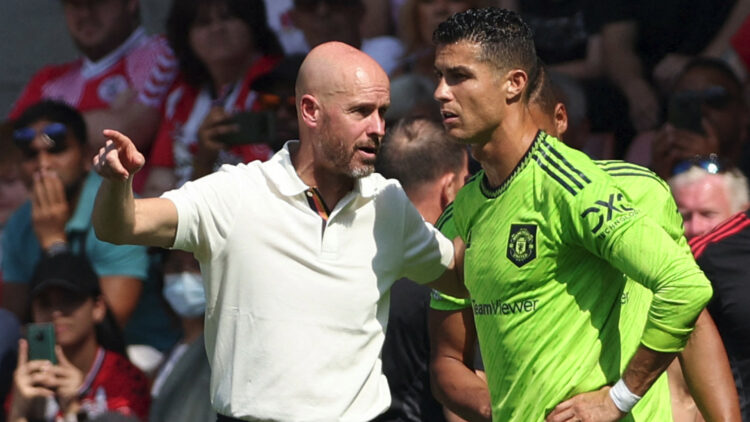 Erik Ten Hag has insisted Cristiano Ronaldo is happy at Manchester United, despite concerns the striker could leave in January’s transfer window after a lack of game time.

Ronaldo was an unused substitute in United’s heavy defeat against rivals Man City on Sunday. Ten Hag said he resisted the temptation to bring on Ronaldo “out of respect for his career.”

Ten Hag told reporters in a news conference on Wednesday the 37-year-old is “pissed off” when he doesn’t play, but there is “good spirit.”

“I don’t bring him on out of respect, it’s nothing to do with what’s happening for the future or January or next year,” Ten Hag said. “I don’t see he’s unhappy, he’s happy, he’s training well, he’s enjoying it. Everyone is training well, there’s a good spirit.

“He’s not happy that he wasn’t playing on Sunday, but that wasn’t the question.

“The question was about his mood when he’s around and he’s happy. Of course, he wants to play, he’s pissed off when he’s not playing.”

Meanwhile, Ten Hag thanked City and Pep Guardiola for teaching his side a lesson in the derby.

United were 4-0 down at half time at the Etihad Stadium on Sunday and eventually lost 6-3.

Ten Hag said the result was a “reality check” after wins over Liverpool and Arsenal and insisted he expects a response when the squad travel to Cyprus to face Omonia FC in the Europa League on Thursday.

“When you beat Arsenal and Liverpool, now we get a reality check with Manchester City,” Ten Hag said. “We know we have to step up. So thank you for the lesson Pep and City, we will take that, we have to understand.

“When you’re in a process it won’t go only upside down, you will have setbacks.

“We beat Liverpool, but on Sunday we had a bad day at the office and we got beat. We have to accept that, but we can’t accept our performance, that was unacceptable.”

Ronaldo trained at Carrington on Wednesday and is set to be part of the squad which travels to Cyprus for the clash with FC Omonia.

Raphael Varane, Harry Maguire, Donny van de Beek and Aaron Wan-Bissaka were all absent from training and are set to miss the trip.